Things with the house are finally mostly finished, and it feels so good to just be at home.  Both Vu and I often say how much we love living here.  Our latest adventure with home ownership was one that really freaked me out.  We had tent caterpillars.  I get all creeped out and itchy just thinking about it.  Disgusting!!! But it is worth it to be able to have a home we love so much.  So finally here is the photo tour.  Welcome to our home! 🙂

Warning, there are a lot of pictures.  I hope you like it!

I love the video my church came out with around Easter, “Because of Him”, so I wrote down some of my favorite parts of the text and that is what I used in the quote boards.  I cut 3/4″ plywood to 14×14″ and painted them white, then used a stencil to pencil in the letters until I got them where I wanted them to be and then painted it by hand.  It would have been faster to use a stencil I could just paint through, but I couldn’t find one with simple letters and that would fit all the text I wanted to get on.  It took me about a day to paint it.  The “Because of Him” parts are a 1/4″ piece of board that I cut to 13 1/2″ long and glued on after I painted it.  The nail board is of Angel Moroni, but I want to make the strings thicker, I just ran out of embroidery thread and haven’t gotten more yet.  The bottom middle white piece is 1/4″ plywood that I glued large popsicle sticks to in a herringbone pattern and then painted white and attached a knob to hang something from. The canvas prints I had printed from Costco, their 14×14 gallery wrap.

The main living area’s are on the second floor, and all form one large room.  We really like this layout (except that I have to always have the dishes done before people come over). 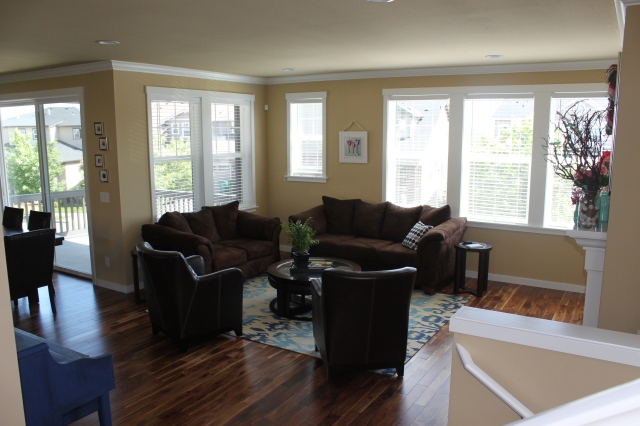 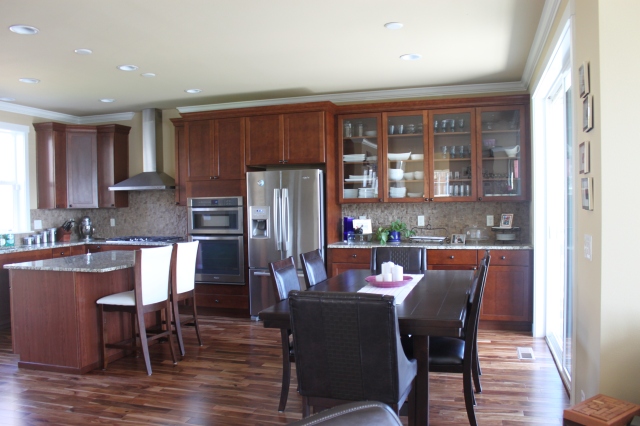 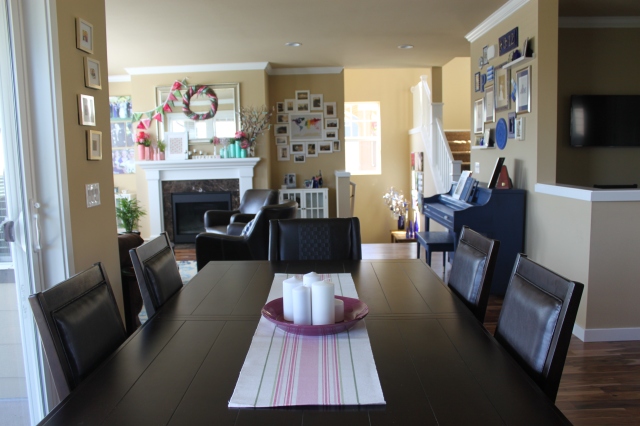 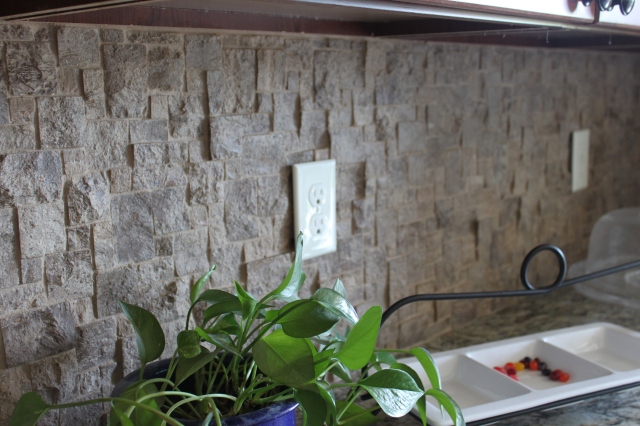 One of our favorite feature’s of the house is the wood floors.  They are beautiful! Followed closely by the stone backsplash and the cabinet/counter area in the “dining room”.  The builder called it a butler’s pantry, but I wouldn’t call it that.  However I am not sure what to call it.

This map in the travel wall is another one of those projects that I maybe took on a bit more than I expected to.  I have not done very much embroidery before, besides the couple of random cross stich samplers as a kid, and I decided I wanted to get into it.  I saw a few things on Pinterest that used a bunch of French knots and thought it would be fun to make a map out of French knots as the centerpiece for this travel wall that I wanted to make.  After finishing the purple section I calculated how long it took me and how much more I had to do.  It was a little bit daunting.  Just one more example of how I make things way more intense than normal people do.  It took me the whole month of March to complete.  But I love it and I love seeing all my pictures of the places I have been.

This is the May/June mantle decorations. 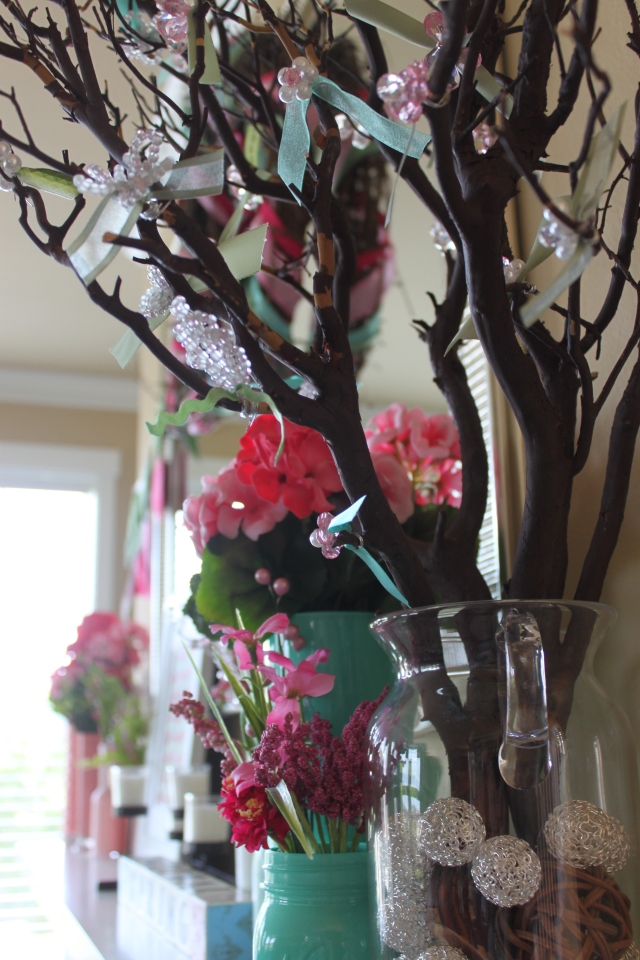 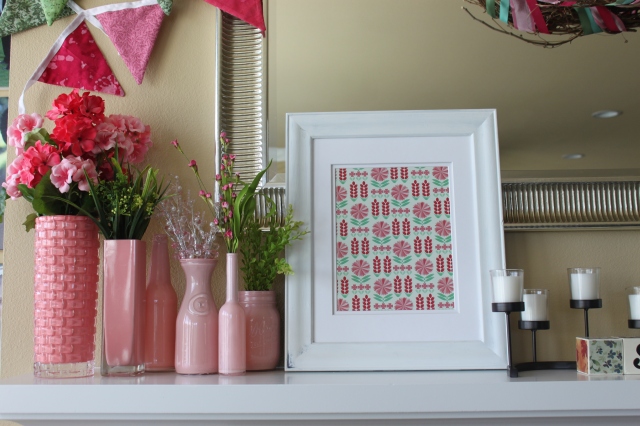 I painted clear vases and bottles with lettering enamel paint.  I had a hard time finding this paint.  I called every craft store in the area and no one carried it.  I ended up ordering it from Amazon.  I used the aqua, salmon and white and then mixed the white in with the other two colors to get the ombre for each bottle.  This paint is so great do this with.  It doesn’t have to be baked, it is nice and runny so you can just twist the bottle around to coat it, and then when it dries it is still waterproof so if I wanted to put real flowers in I can.  I tried some other enamel paints from different crafts stores and they didn’t work at all.   The little bead/ribbon blossoms on the branches I made from pulling apart a bead garland I got on clearance from Michael’s and used the wire to twist them into flowers.  I designed the floral graphic in Illustrator. 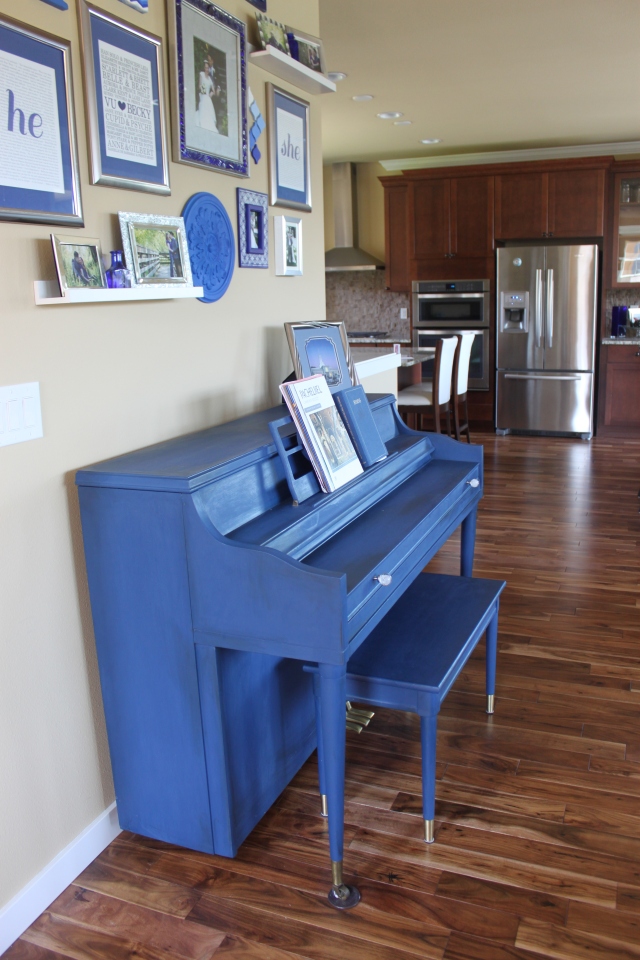 One of my old coworkers at the hospital gave me her piano which was very nice of her.  I have been wanting to paint a piano for a long time, so it was perfect.  It was actually a lot easier than I expected it to be.  I just looked up a bunch of tutorials and found one where you don’t have to take apart the piano at all, and I used Annie Sloane chalk paint so that I didn’t have to sand or prime at all.  I think it turned out pretty well.

And the piano goes very well with the blue gallery wall above it. 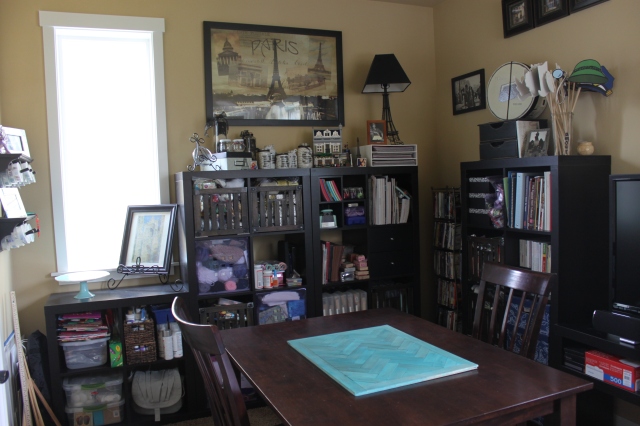 I love this herringbone board I made.  A lot.  I followed this tutorial. 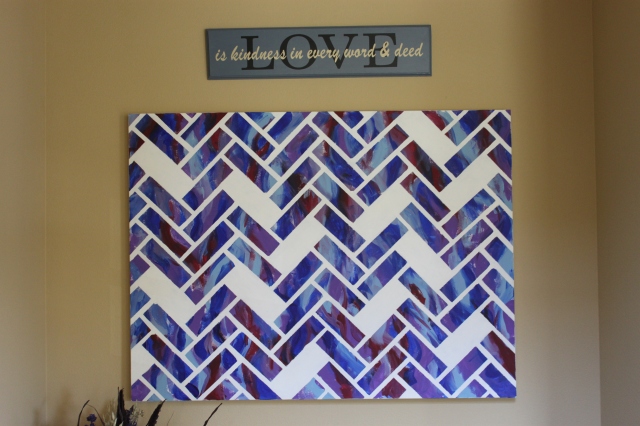 I made this painting a year and a half ago, inspired by this picture from Pinterest. I really like Herringbone…

I started this series of canvas paintings in January when I was in Utah with my family for “Christmas”.  My dad bought a bunch of canvases to paint as a family and we worked on our own together.  Or at least those who were interested in making one.  I made the green one there, and then made the other 5 after I came home. 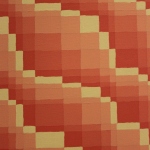 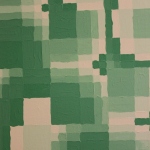 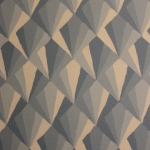 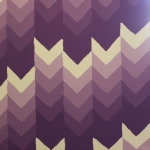 The ground floor has the garage, the mud room, and Vu’s man cave. 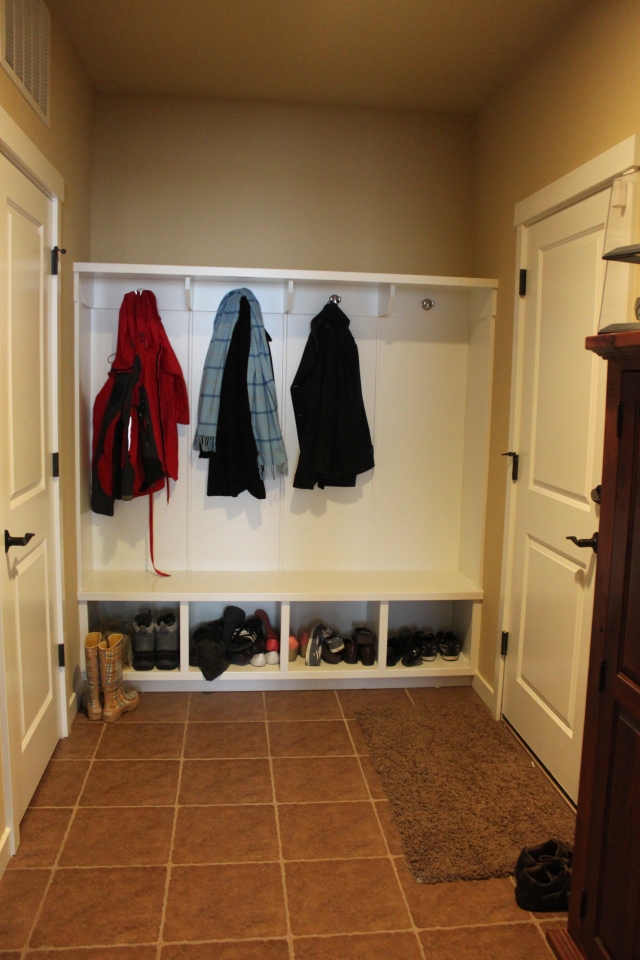 Vu loves his room so much.  I am not allowed to use it unless I leave it in the same condition in which I found it.  Including the placement of all the remotes… 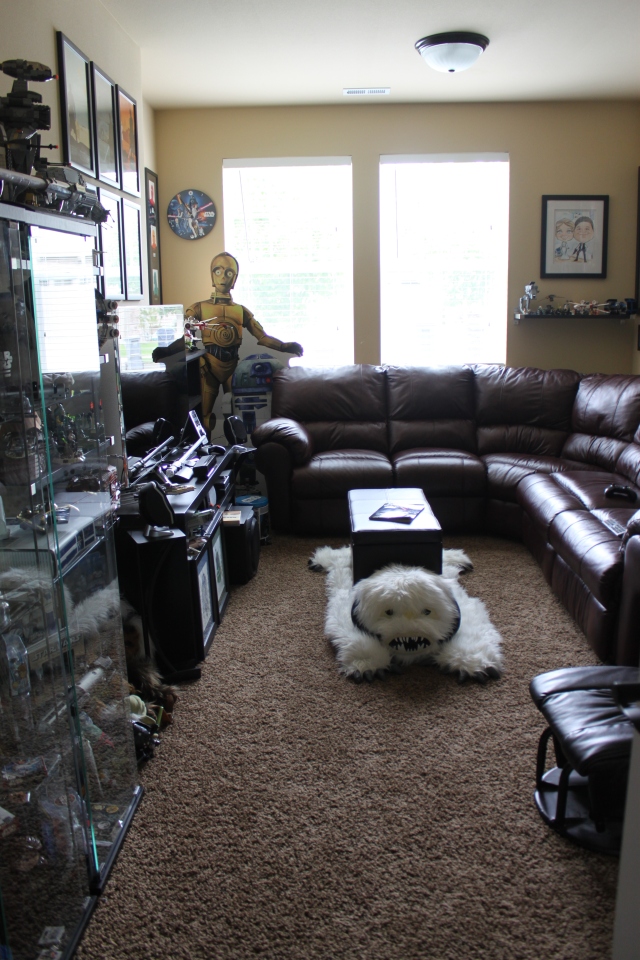 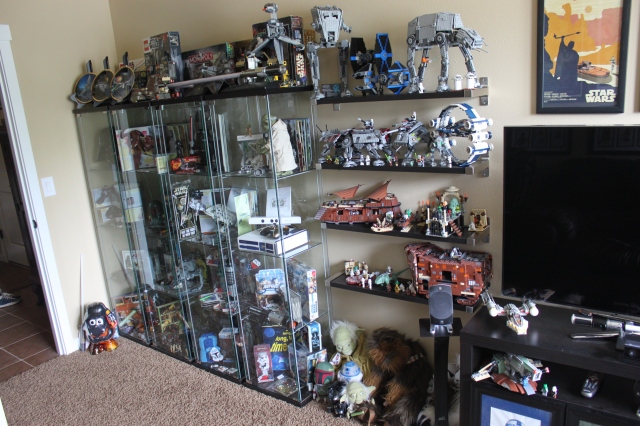 And his little tiny office.  That he put in the closet.  Where he does all of his working from home and MBA homework. 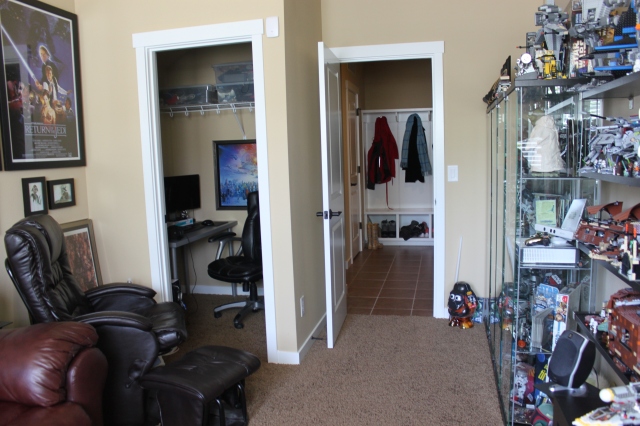 The top floor has 3 bedrooms: The Master, a guest bedroom, and a third room that is currently where we throw anything that doesn’t have a place. 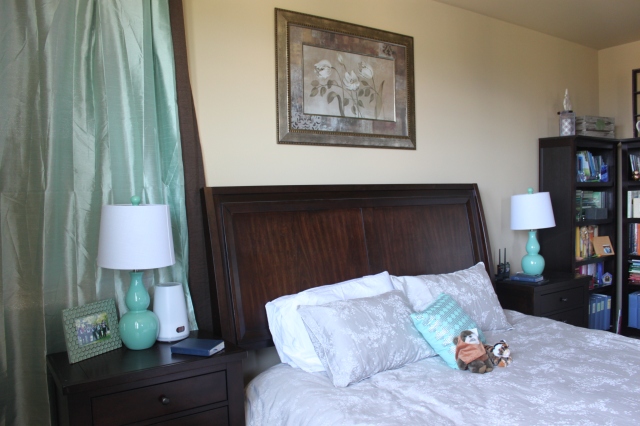 And the Master bathroom.

We had a little house warming party on Saturday and I made a few different appetizers and desserts for the party.  We especially liked the wontons.  I used all pork since I don’t like seafood.  They were so good.  Our friend Carrie was nice enough bring some cupcakes and a cheesy chip dip. 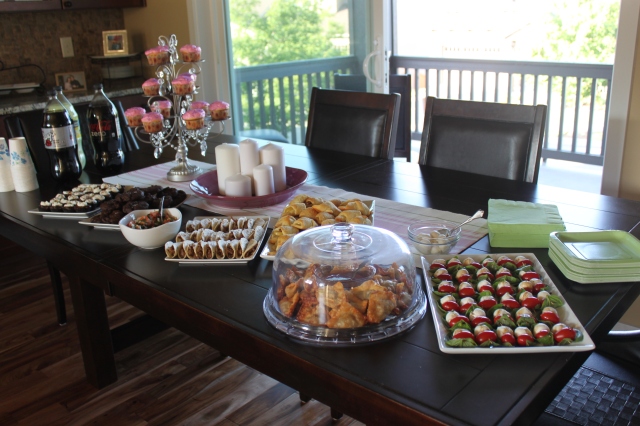 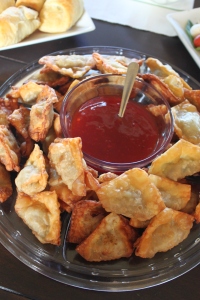 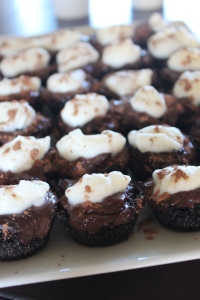 Congratulations if you made it all the way through!