The July decorations is one of Vu’s favorite, I think he would be happy if I left it up all year round and only took it down for Christmas.  He is extremely patriotic.  I actually had most of them finished last year, but because I had surgery on July 1, and was sick before that, I didn’t end up getting them done until towards the end of the month.

The map of the US I made by tracing the map on some cotton fabric and then using different shades of red, white and blue thread I embroidered around each state with the sewing machine and went around each state 6-8 times.  I doubled up the fabric hoping that would prevent the puckering, and it did lesson it, but it still puckered a bit.  I think using some interfacing would have helped, but as I always tell anyone that I am giving crafting advice too, sometimes things don’t go as perfectly as you would like, but you just have to own it and if you can’t change it then decide that is how you like it and you meant to do it that way.  🙂

I made this printed subway art in illustrator and really love it.  I love how each phrase has a graphic that matches it.  I really enjoyed creating this one.  But I am a bit obsessed with Illustrator and love creating anything in it.  I laid one of my square cobalt vases on it’s side and put the frame on top of it to add some height.  The America sign I got years ago from a craft store, but I decided to repaint it this year.  I sanded all of the original paint off because when I first tried to paint it the white mixed with the previous red and made it pink.

The flag I made out of 1/4″ thick plywood and some 1/4″ thick poplar board.  The big back piece and the blue stars are cut out of the plywood and then the red stripes are made out of the board.  I got a 3 1/2″ wide board and since I made it last year before I had my own table saw, my friend cut it for me.  He cut the board lengthwise into 3 even pieces so they are about 1 1/8″ wide.  I measured the whole thing before I cut to make it the right dimensions and to make sure it would all fit properly.  After I painted all the pieces I glued the blue board and red stripes onto the back board and then modge podged some lace over the white stripes and some red burlap over the red stripes, to give it some texture.  Vu likes this one best because there are actually 13 stripes and 50 stars.  He thinks all décor flags should all always be perfectly correct…  I set it on the wood insert I made for the May centerpiece to add height, which then fit the letter blocks nicely underneath it. END_OF_DOCUMENT_TOKEN_TO_BE_REPLACED

This past weekend I threw a graduation party for Vu and of course any celebration for Vu must require at least something Star Wars related.  So the whole party was Star Wars themed.  Even though we were celebrating his graduation with his MBA and not his 5th birthday party.  Because if you look up Star Wars parties on Pinterest they are all 5 year old birthday parties.   (Same thing goes for Star Wars sheets, to Vu’s disappointment).

I made a paper banner to hang over the mantle.  Vu informed me after I hung it up that I made a spelling mistake.  Apparently it is Padawan.  I have a Star Wars font that I used as a template and drew the letters on yellow paper, cut them out and stuck them on some black and white squares and then strung them on some baker’s twine.  I also pulled some artwork from Vu’s man cave for the mantle.  I painted these water color pictures for Vu and they were the only framed art that Vu didn’t have hung in the man cave and I really hate hanging pictures, so I didn’t want to take any off of the walls that I would have to rehang.  I am super proud of the Yoda, it is my favorite.

I also stole all of his stuffed animals to decorate the piano with.

I created a Star Wars “ceiling” over the living room and I really liked how it changed the feel of the room.  I strung black crepe paper streamers across it and made some star garlands by punching out stars from white cardstock and sewing them together.  We of course had the music from all the movies playing throughout the whole house. END_OF_DOCUMENT_TOKEN_TO_BE_REPLACED

I can’t believe we are finally here.  I am so excited to finally be done!  Or more accurately, for Vu to finally be done.  On Sunday night after dinner Vu said, “This is when I would normally start doing homework.”  And he didn’t have to.  It was so nice.  I have so many plans for this summer and fall now that I can actually plan things and have Vu do them with me.   I can’t wait.

When he walked across the stage to get his diploma case he (along with some of his buddies) waved his arms above his sides like an airplane (I just missed it in the picture) to indicate that now that he was finished he is ready to move on to the next stage. Which is to get to the point that he can buy a G6.  If you don’t know, that is a personal jet… so we can fly to our future apartment in Paris… and our island off the coast of Montenegro.  🙂

I am so proud of Vu!  He has worked so hard, learned so much, made great friends, and his big dreams have gotten even bigger and I know that he is going to make them come true!  He is so motivated and talented, I know he can do anything he chooses to do!  So Congratulations Vuroom!  I love your guts!

A few people have asked me about the month’s that have no holiday, what do I do?  June is one of those.  And this one was hard for me, as I mentioned in January.  Early on I decided that I wanted to use yellow and green, because those are the colors that come to mind when I think of the beginning of summer, the sun shinning, the grass being mown.  And then…?  I struggled.  I finally came to the decision that I wanted to capture the essence of Hobbiton.  Nerdy I know.  But Hobbiton feels like perpetual summer to me.  So with that in mind I decided on a sort of rustic farmhouse style.  Maybe a little bit of French farmhouse thrown in there.  Because you know, France.  It’s my obsession.  I must admit though that I am terrible about classifying styles.  So maybe I missed the mark on that, I can’t tell.  But either way the June décor feels like summer to me, soooo I am happy.

After I had everything out, minus the fresh flowers, succulents (pictured below) and the paper flowers for the chicken wire wreath, I took a step back and looked at everything.  And was a bit disappointed.  I didn’t love it.  I stared at it for a good 5 minutes trying to figure out why I didn’t love it.  And then I realized.  The way I had it all placed it was all perfectly symmetrical.  So I removed some things, moved others around and it made the hugest difference.  Even Vu could see how much better it looked.  And he does love his symmetry.  Also goes to show how much fresh flowers add to a space. 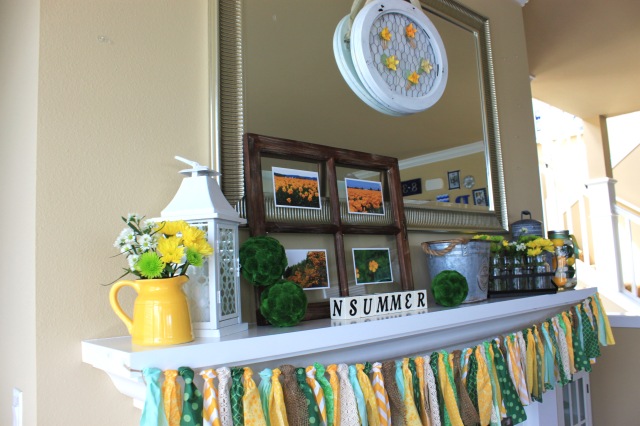 The day that I changed out everything was a really warm sunny day, the first one in this string of warm sunny days we had (which ended today).  So all the neighborhood kids were out riding their bikes and having water fights in their kiddie pools, the crew of guys that mows a bunch of the neighborhood’s lawns was out that day mowing everyone’s lawn, and all the neighbors were out chatting.  The only thing it was missing was an ice cream truck driving around and someone grilling up some meat.  So it really felt like the beginning of summer.  Bring on the frozen lemonade’s! 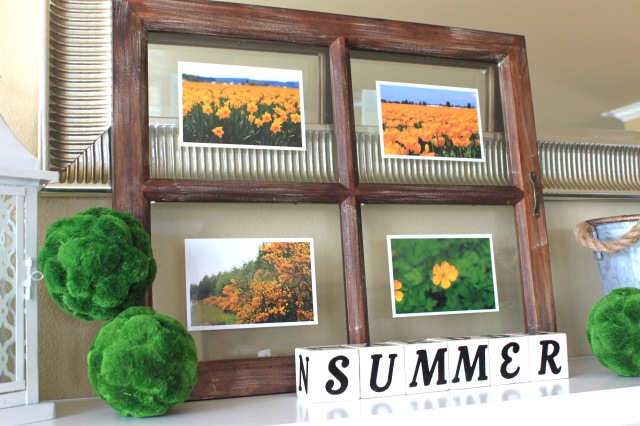 The very first thing I decided I wanted was a window picture frame with pictures of yellow flowers in it.  When I went to the salvage yard looking for a window for the shelves for March, I also was looking for one for June.  But like I mentioned, they were all moldy and gross.  Shortly after that I was in Michael’s and happened to see this one, and I had a 50% off coupon.  Which made this frame only $5 more than the dirty gross ones from the salvage yard.  For $5 more I didn’t have to do a single thing to it, and since it is actually meant to be a picture frame instead of you know, a window…, each section is double paned and has little holders in the back to make inserting and removing pictures super easy.  I say that is a win, win for me.

Milk crate and milk can(?) from Hobby Lobby.  Note the metal pail on the left with the French writing… END_OF_DOCUMENT_TOKEN_TO_BE_REPLACED