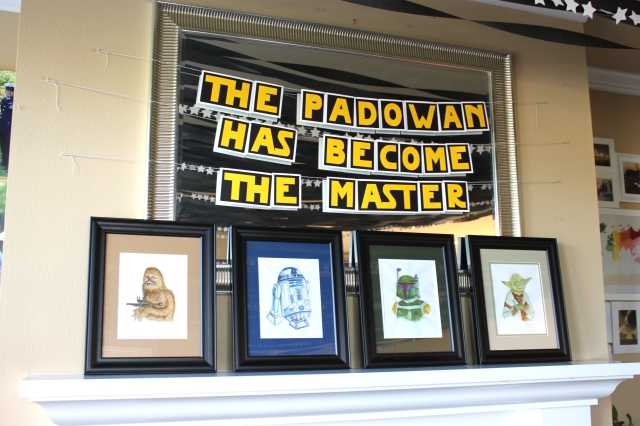 This past weekend I threw a graduation party for Vu and of course any celebration for Vu must require at least something Star Wars related.  So the whole party was Star Wars themed.  Even though we were celebrating his graduation with his MBA and not his 5th birthday party.  Because if you look up Star Wars parties on Pinterest they are all 5 year old birthday parties.   (Same thing goes for Star Wars sheets, to Vu’s disappointment).

I made a paper banner to hang over the mantle.  Vu informed me after I hung it up that I made a spelling mistake.  Apparently it is Padawan.  I have a Star Wars font that I used as a template and drew the letters on yellow paper, cut them out and stuck them on some black and white squares and then strung them on some baker’s twine.  I also pulled some artwork from Vu’s man cave for the mantle.  I painted these water color pictures for Vu and they were the only framed art that Vu didn’t have hung in the man cave and I really hate hanging pictures, so I didn’t want to take any off of the walls that I would have to rehang.  I am super proud of the Yoda, it is my favorite. 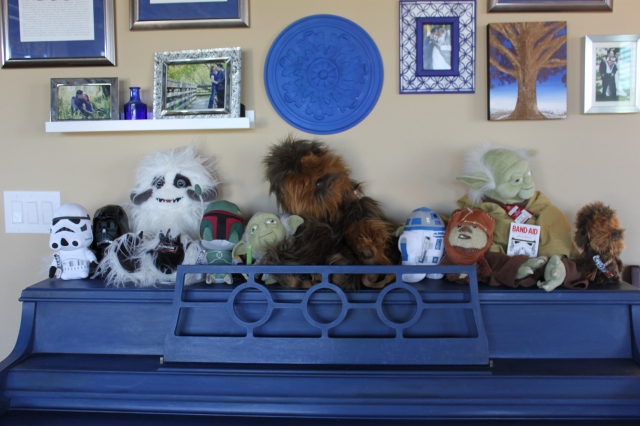 I also stole all of his stuffed animals to decorate the piano with. 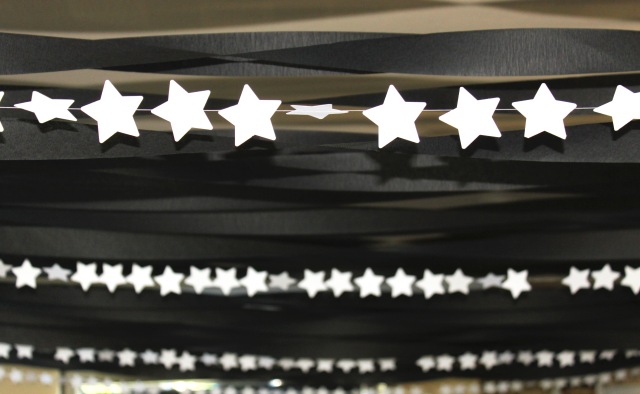 I created a Star Wars “ceiling” over the living room and I really liked how it changed the feel of the room.  I strung black crepe paper streamers across it and made some star garlands by punching out stars from white cardstock and sewing them together.  We of course had the music from all the movies playing throughout the whole house. 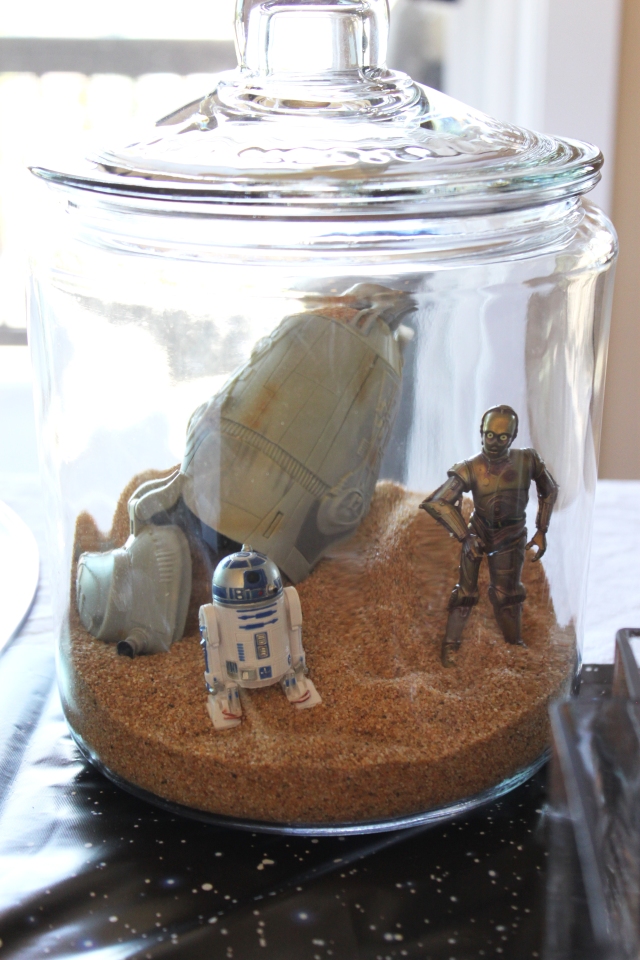 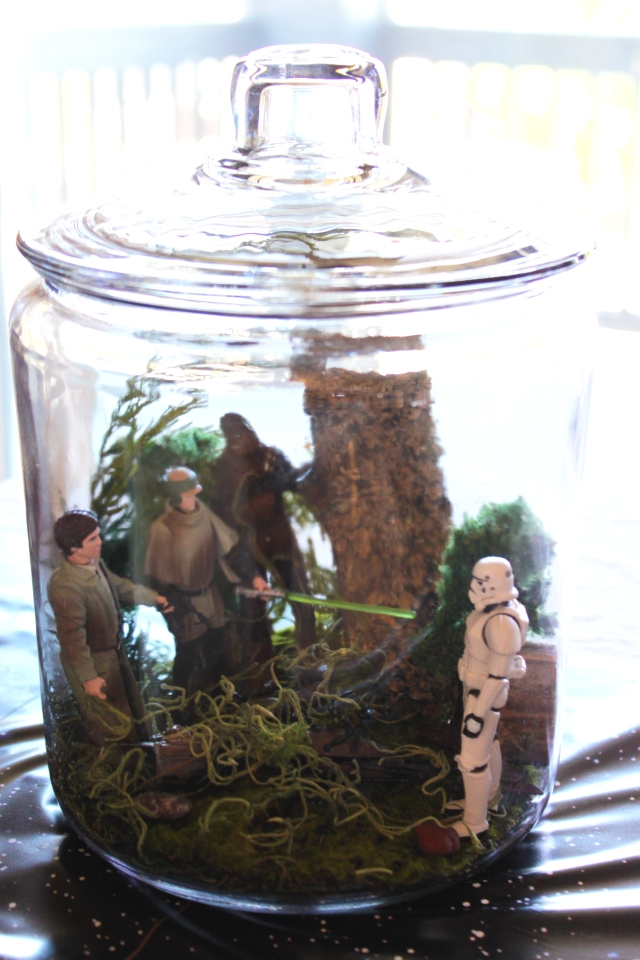 Using some clear glass cookie jars I created diorama’s from a few different scenes from the movies.  These were really fun to make.  I ordered the figures from Amazon and then used sand and tree branches and moss and things to fill them in.  My friend Wendy was kind enough to find some very cool branches for me to use for the “Return of the Jedi” ones.  I wanted at least one diorama for each movie, but we ended up having extra supplies and made another one for “A New Hope” and “Return of the Jedi.”  The second one for “A New Hope” with Bobba Fett is a smaller jar and was much more marbled than the other ones so it was hard to get a good picture of it.    I think these were Vu’s favorite part. He wants to keep them and display them in the man cave. Although I don’t know where he is going to put them.  It is already so packed in there. 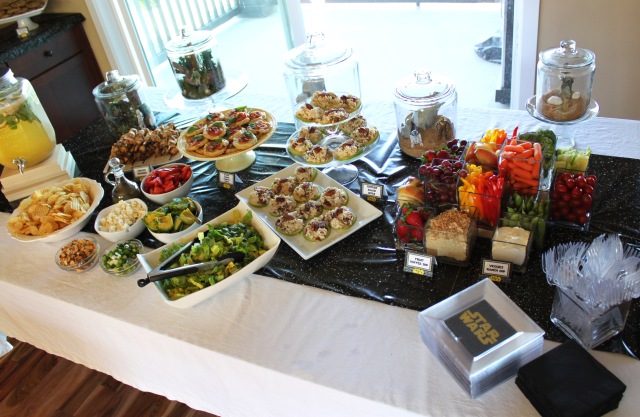 I used the diorama’s as decoration for the food table.  I found a couple of Star Wars plastic table cloth’s at the party store and laid one over a white table cloth. 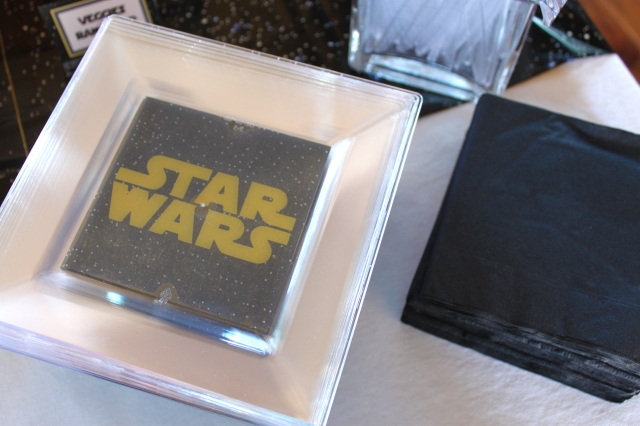 I also got these clear plastic square plates from the party store.  I really wanted some Star Wars plates, napkins and cups, but as most Star Wars parties are for 5 year olds, everything that I could find were very cheesy and cartoonish.  Which I really hate.  I seriously don’t understand why everything made for kids has to be so cartoony.  Like kids can’t appreciate some classy party décor?  Or toys?  I feel like they would.  But I don’t have any kids, so what do I know.  Anyway, since I didn’t like anything I found, I decided to try and create my own when I saw these plates.  I bought some transparent whole sheet label paper, then created this graphic in Illustrator.  I could only find inkjet paper and I have a laser printer, so I took it to Office Depot to print it for me.  After I created the design, I reflected it since it would be printed on the non sticky side of the paper, then cut them out and stuck them to the underside of the plates.  I wasn’t sure how well this was going to work since the design would have to show through the plastic plate and the transparent paper, but I was really happy with how they came out.  Even if they weren’t as bright as they would have been if someone would just make some nice paper plates.

For the food I just decided to make some finger foods that I wanted to eat, because all of the Star Wars themed foods that I have seen I think are kind of stupid.  And totally overdone in my opinion.  But most normal people probably haven’t been as exposed to “Leia cinnamon buns”, “Jabba Jello Jigglers”, “Vadar Taters” and “Han Burgers” as I have been.  So maybe you still think they are clever.  Although someday if I have a 5 year old boy maybe I will be making all of those for a party. 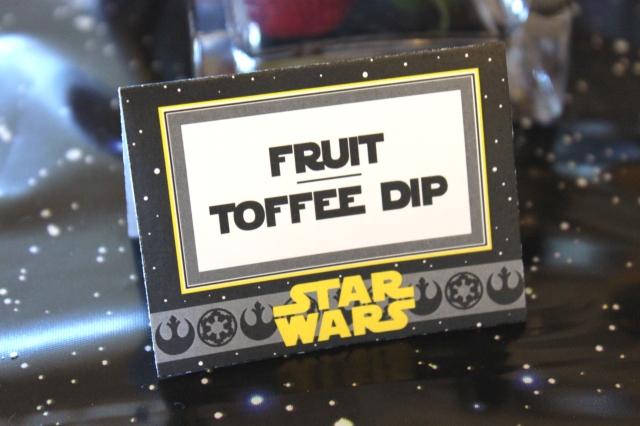 I contented myself with making cute food tags in Illustrator instead. 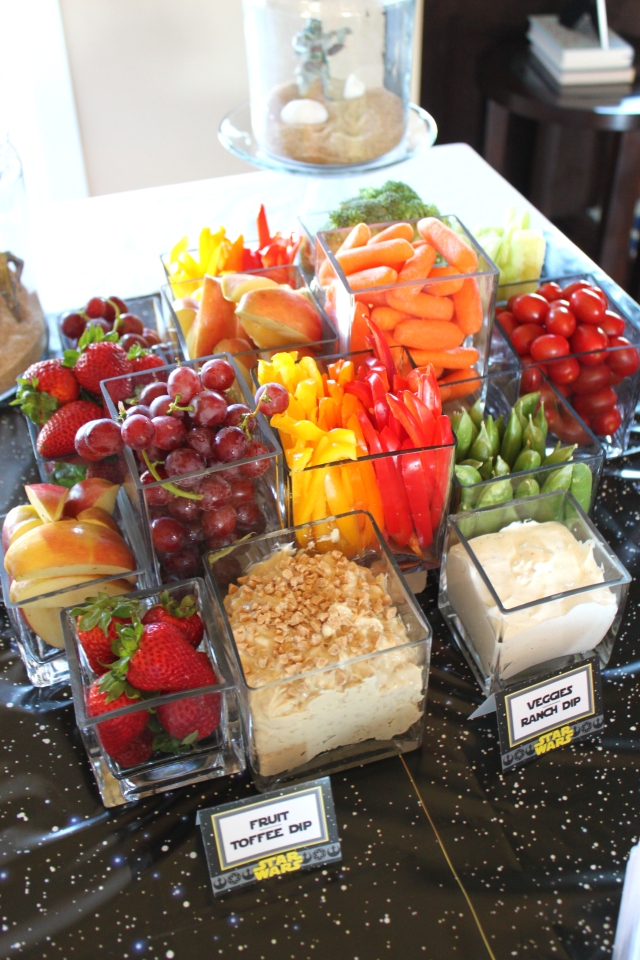 For the fruit and veggie display I used some of the old 2 and 4 inch clear square glass vases I have from our wedding (they have been getting a lot of use lately) and elevated them with random scraps of wood.  I love how this looked.  Vu cut all of the veggies for me, with some help from his coworker Nick (I had to fix the pepper one though, because I wanted it to be yellow, orange, red, and Vu put them in the jar, yellow, red, orange.  And you know it had to be in “ombre” order.)  I made a sour cream ranch dip for the veggies.  Our friends Carrie and Steve brought the fruit and toffee dip.  I love this toffee dip so much.  It is in the “Our Best Bites” cook book if anyone is interested in it. 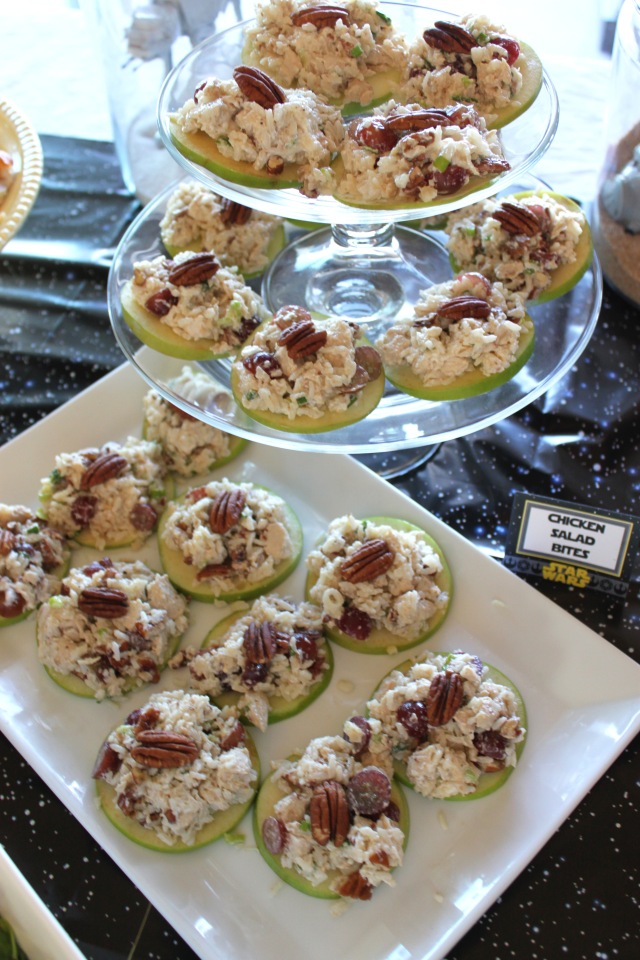 I made some chicken salad bites by scooping the chicken salad onto sliced apples.  You can tell Vu scooped most of these.  I would have preferred they be a little bit less messy…

I got the idea from here, but I used a different chicken salad recipe that I got from my friend Lisa’s baby shower.  It uses rice in it and balances out the mayo with some heavy cream which make it so much better in my opinion.  I love chicken salad sandwiches, but I don’t love mayo and they often have way to much of it for my taste.  And this is my favorite recipe that I have had.

I made these tarts, because you know, bacon!  Vu does love his bacon.  I also had some Costco Mediterranean chicken skewers, a strawberry vinaigrette salad (I had big plans to make it up and put into cute little cups with tiny forks, but there are always a few things I have planned that I don’t get around to, and this was one of them), some sea salt potato chips and some lemonade.

For dessert I had a cookie bar set up in the “butler’s pantry” with another Star Wars sign saying “Vu is one smart cookie” and the other plastic tablecloth to cover the counter. 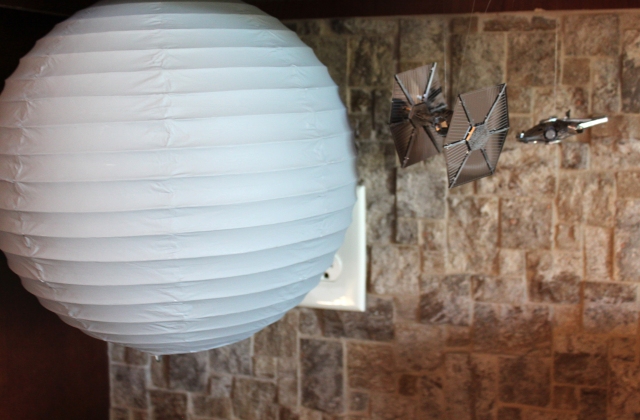 I had meant to paint this paper lantern like the death star, but only got as far as painting it gray.  I found these little metal models of the millennium falcon and Tai fighter to create a little fighting scene over the cookies.  It would have been better if the lantern actually looked like the death star… maybe next time.

The sugar cookies were my favorite.  I didn’t think I was a very big fan of sugar cookies, because usually the ones I have taste similar to the ones I made for Carrie’s baby shower which I hated, but back in February my visiting teacher (in our church we have 2 women assigned to us to check in on us once a month and make sure we are doing ok and share a spiritual thought with us and they are called our visiting teachers) brought me her sugar cookies and I couldn’t believe how amazing they were.  Almost life changing.  So she graciously gave me the recipe which I used to make these.  Of course I have Star Wars cookie cutters, so I used the Darth Vadar and Yoda ones, and then a circle one as well for the Imperial and Rebel emblems.  The yoda faces turned out kind of ugly, so I just stuck with the plain green frosting for those ones.  I cut one of the boards from the mini food dinner party to display them on and covered them with wax paper and used some 2×4 blocks (which were for a church activity on Tuesday) to elevate the back board. 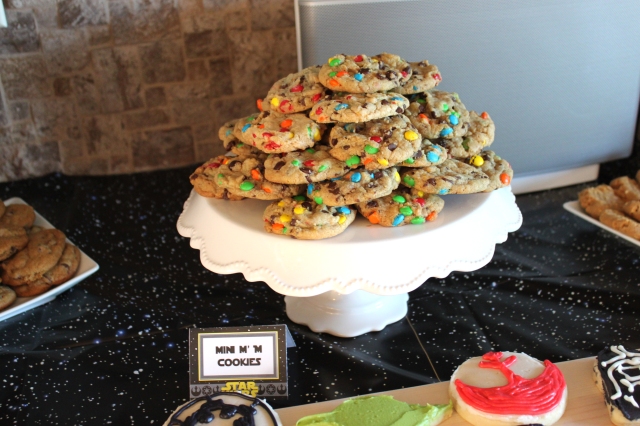 The other 5 kinds of cookies were made by both of my amazing visiting teachers.  They are seriously so great.  They asked if there was anything they could do to help for the party and when I asked if they would make some cookies they came back to me telling me they would be making 5 different kinds, which left me only having to make the sugar cookies.  Such a huge help!  They made “Wookie cookies” (a cinnamon chocolate chip), mini M&M cookies, peanut butter cookies, mint peppermint patties and toffee chocolate chip.  They were so good.

I had a little Star Wars photo booth for people to take some Star Wars pictures.  I bought a huge piece of black cotton fabric and using white fabric paint and the end of a paintbrush, painted stars on the fabric.  Then created some props in Illustrator.  (I forgot to cut out Yoda’s eyes…) 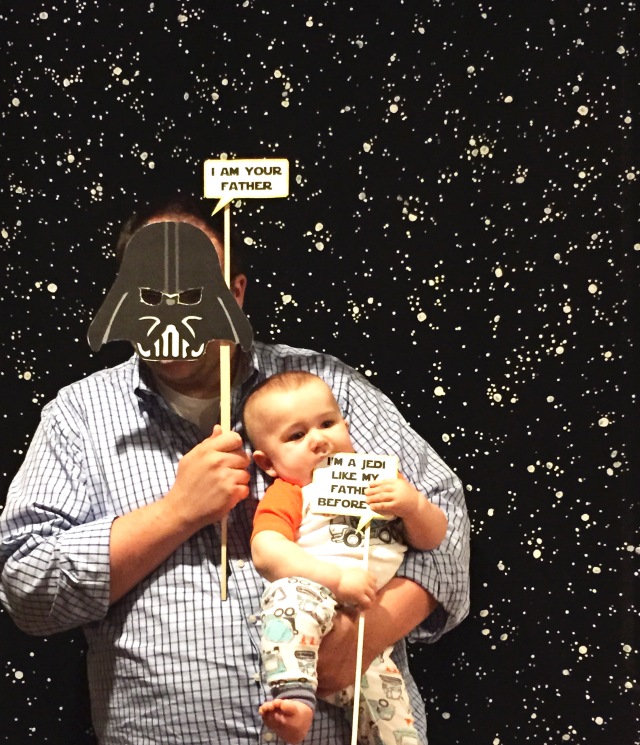 I loved this one Carrie took of her husband and son.  Absolutely adorable.  I am sure someday we will be using the props to recreate this.

Carrie also had Benson wearing this cute little shirt that said “V is for Vader” and she added the “& Uncle Vu” out of vinyl.  We had a lot of fun and Vu loved his Star Wars party.  He kept getting more and more excited every time he saw something I was working on.

And one more big final “Yay we are done!”