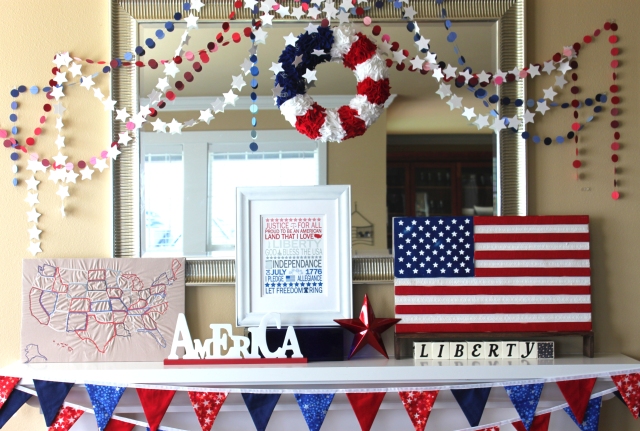 The July decorations is one of Vu’s favorite, I think he would be happy if I left it up all year round and only took it down for Christmas.  He is extremely patriotic.  I actually had most of them finished last year, but because I had surgery on July 1, and was sick before that, I didn’t end up getting them done until towards the end of the month.

The map of the US I made by tracing the map on some cotton fabric and then using different shades of red, white and blue thread I embroidered around each state with the sewing machine and went around each state 6-8 times.  I doubled up the fabric hoping that would prevent the puckering, and it did lesson it, but it still puckered a bit.  I think using some interfacing would have helped, but as I always tell anyone that I am giving crafting advice too, sometimes things don’t go as perfectly as you would like, but you just have to own it and if you can’t change it then decide that is how you like it and you meant to do it that way.  🙂 I made this printed subway art in illustrator and really love it.  I love how each phrase has a graphic that matches it.  I really enjoyed creating this one.  But I am a bit obsessed with Illustrator and love creating anything in it.  I laid one of my square cobalt vases on it’s side and put the frame on top of it to add some height.  The America sign I got years ago from a craft store, but I decided to repaint it this year.  I sanded all of the original paint off because when I first tried to paint it the white mixed with the previous red and made it pink. 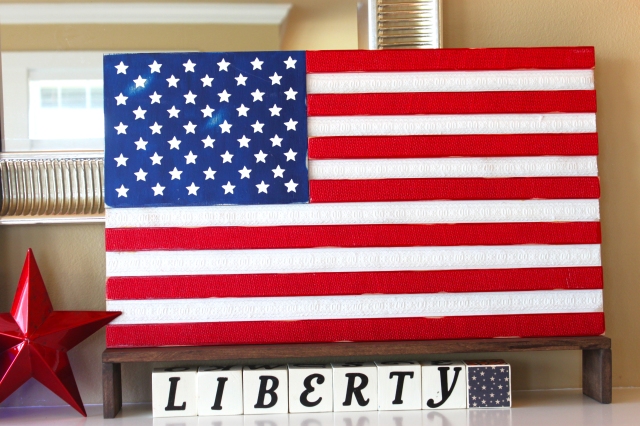 The flag I made out of 1/4″ thick plywood and some 1/4″ thick poplar board.  The big back piece and the blue stars are cut out of the plywood and then the red stripes are made out of the board.  I got a 3 1/2″ wide board and since I made it last year before I had my own table saw, my friend cut it for me.  He cut the board lengthwise into 3 even pieces so they are about 1 1/8″ wide.  I measured the whole thing before I cut to make it the right dimensions and to make sure it would all fit properly.  After I painted all the pieces I glued the blue board and red stripes onto the back board and then modge podged some lace over the white stripes and some red burlap over the red stripes, to give it some texture.  Vu likes this one best because there are actually 13 stripes and 50 stars.  He thinks all décor flags should all always be perfectly correct…  I set it on the wood insert I made for the May centerpiece to add height, which then fit the letter blocks nicely underneath it. 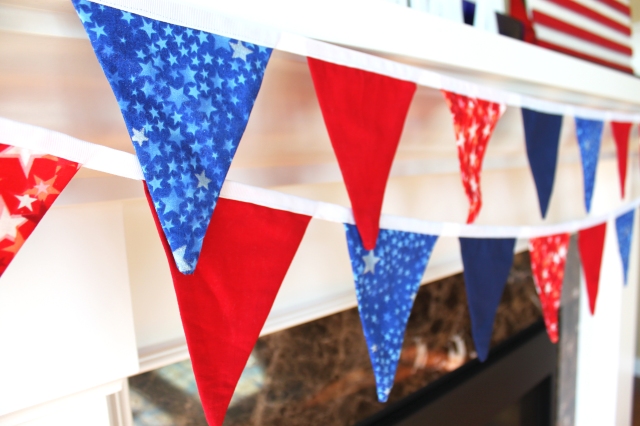 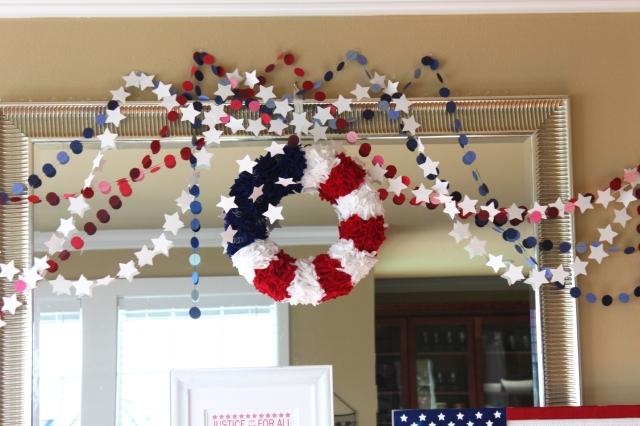 The fabric triangle garland and the sewn red and blue circle garlands I made a few years ago for a birthday party for Vu.  His birthday is July 2, so it was Americana themed.  The star garland was from Vu’s graduation party.  The wreath is made out of foam and felt squares.  My friend Jeanette and I made them last summer using this tutorial.  But she said hers fell off the door just a couple of weeks after she made it and sadly it shattered. 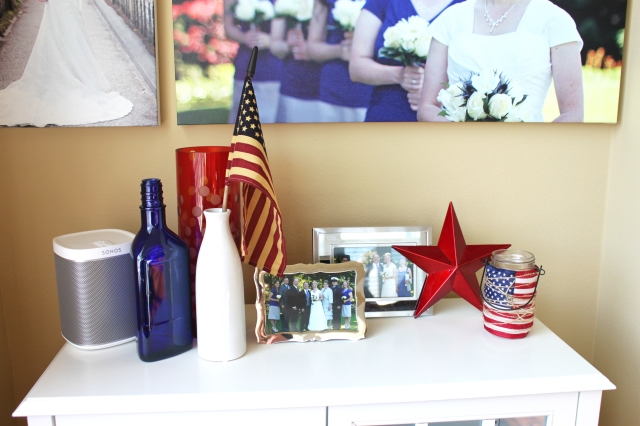 I found the tea stained flag on Amazon and the smaller one at a party store and then wrapped it around the candle jar with some twine. 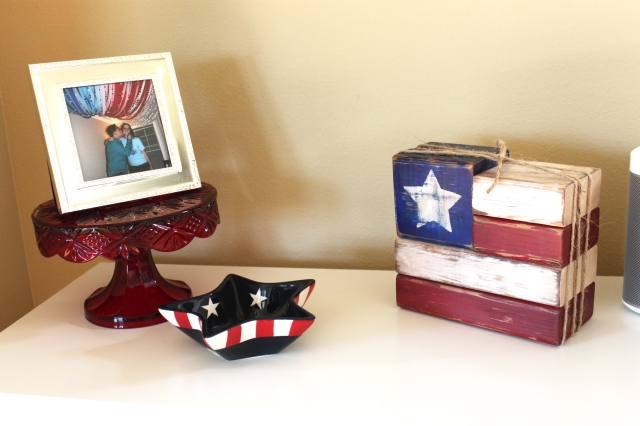 The 2×4 flag I made for a craft night this month that I taught for Rachel’s old ward using this tutorial.  The picture is from the previously mentioned birthday party and you can sort of see the garlands in it.  I love this cake plate that I found on Amazon.  I was hoping to get it for Rachel’s going away party, but it didn’t get here in time.  I love cut glass.  I got if 80% off, but every time I look at it, it is pretty discounted. 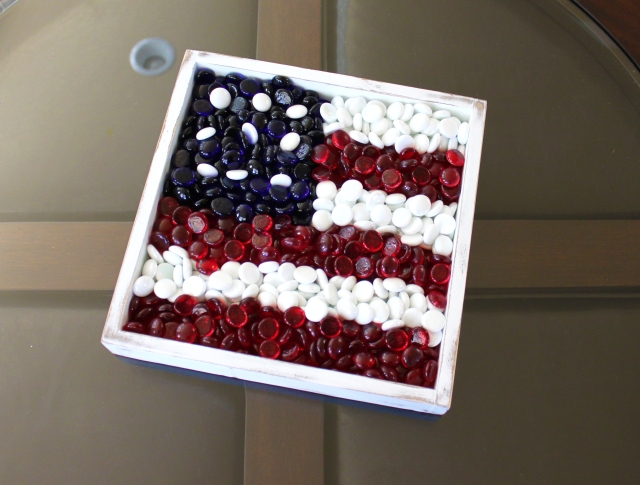 The coffee table was the last thing I did, because I had a hard time thinking of something I wanted to do.  I ended up using the white box from the succulent planters from June and filled them in a flag shape with red, white and blue vase filler pebbles. 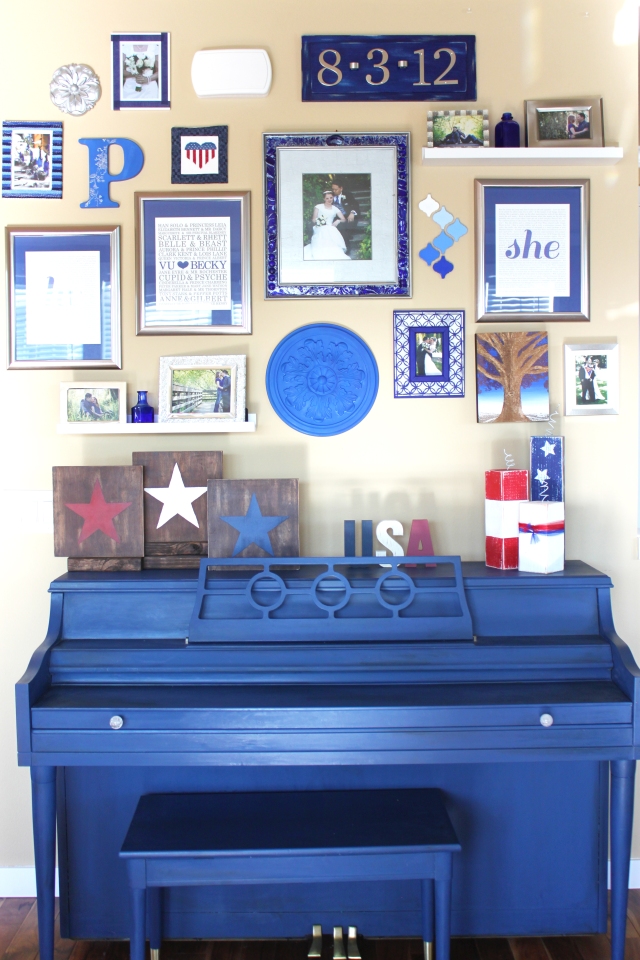 I replaced the small chevron canvas in the gallery wall with the flag/heart cross stich sampler I made when I was young, since they are the same size.  The USA letters in the middle of the piano were from the dollar section at Target, even though they were $3, not $1. 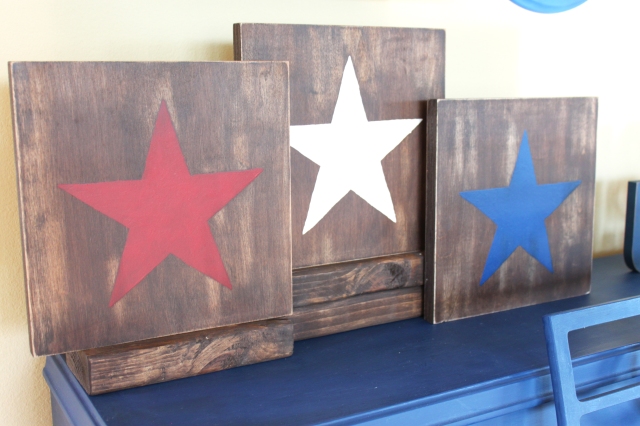 The stars on the piano are squares that I cut out of 3/4″ plywood and stained all brown, then painted on the stars.  This was a good recovering from surgery project.  I had a few extra blocks of stained 2×4 from a church activity last week that I used to elevate a couple of them. 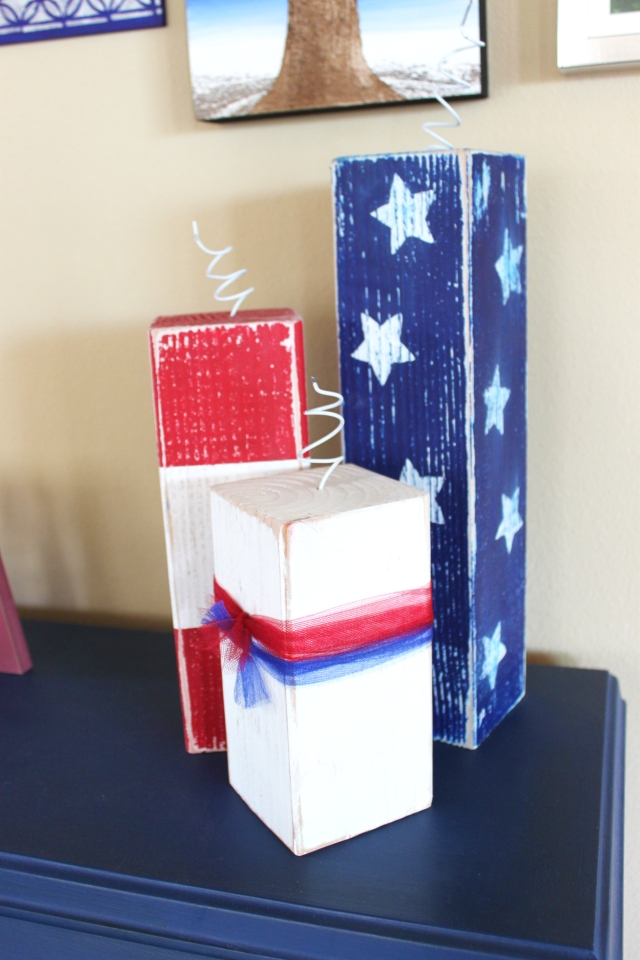 The firecrackers I made at a craft night this month that my friend Misty hosted, that was really fun.  They are cut out of a 4×4 and we painted and distressed them, then I wrapped some red and blue tulle around the white one when I got home. 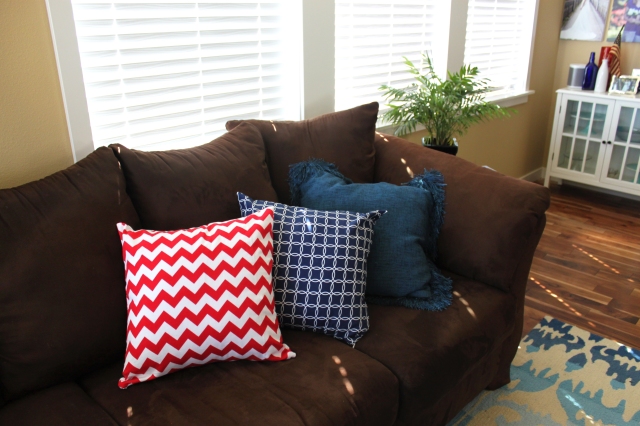 And I did actually get around to sewing both pillow covers this month.  I saw something similar to these on Pinterest, but I didn’t repin it, I just remembered what it looked like and looked for similar fabric for them.  I like that they are reminiscent of stars and stripes, but a little bit different. 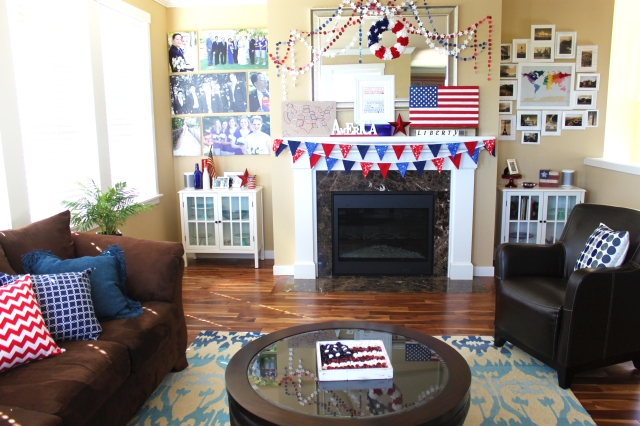 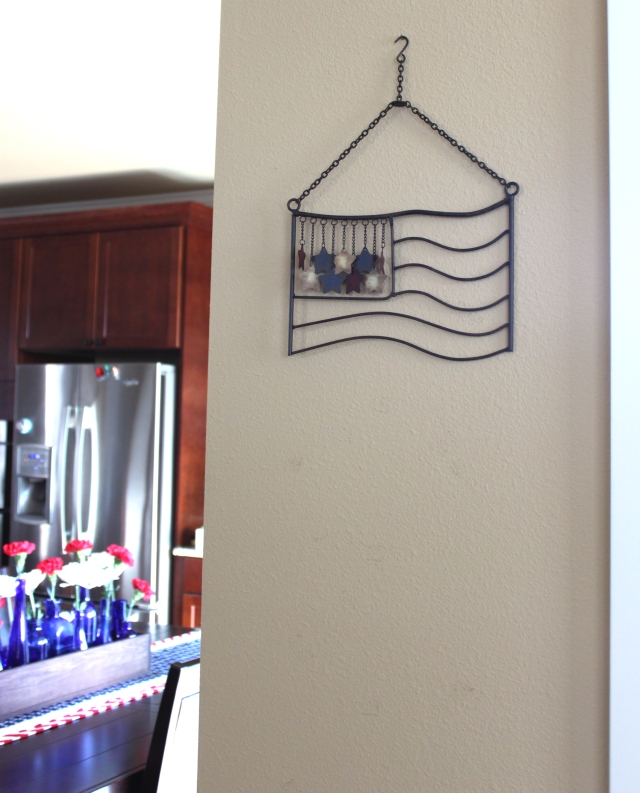 This metal flag is the first 4th of July decorations I ever got, back in college.  It was part of a Christmas promotion at the book store I worked at, if you spent a certain amount you could buy it for $3.  It is still one of my favorites. 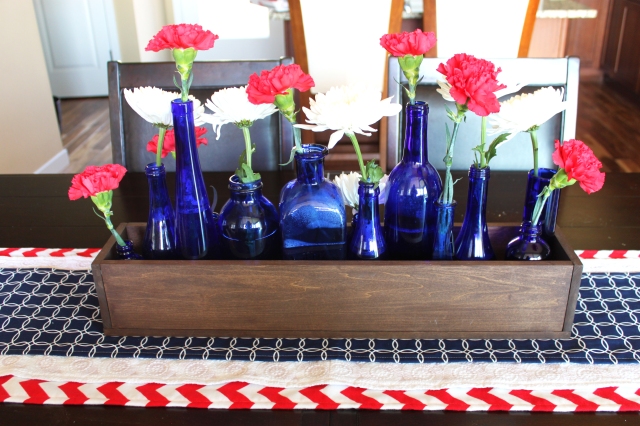 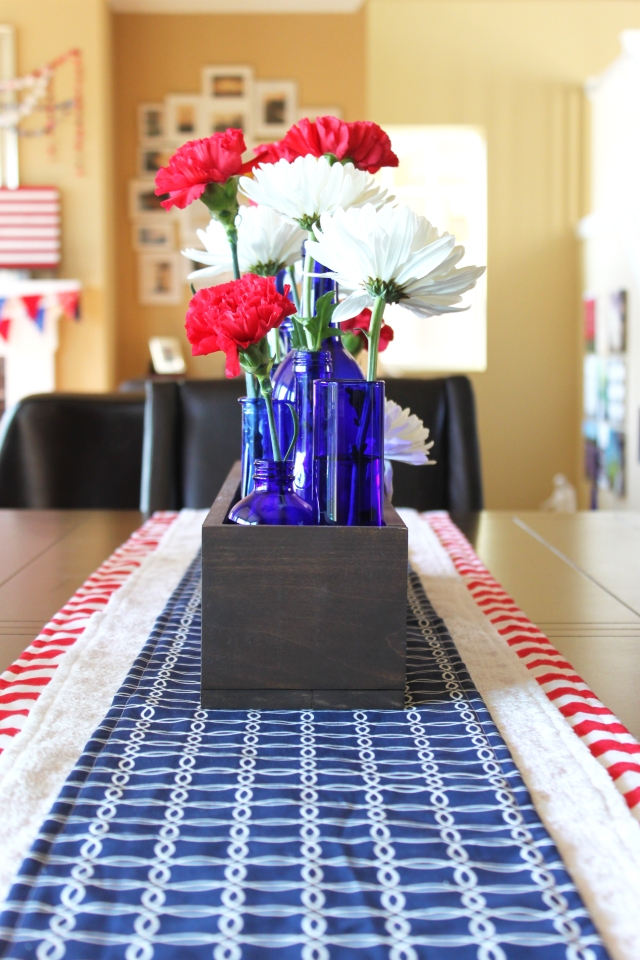 Using the same fabric as the pillows, plus a white fabric, I sewed some layered table runners.  This white fabric is found with the eyelet fabrics, but it doesn’t have any holes so I am not sure if that is what it is called or not.  I love the layered look of the 3 different runners.  I used the wood trough box and filled it with an assortment of cobalt bottles and vases and put red and white flowers in them. 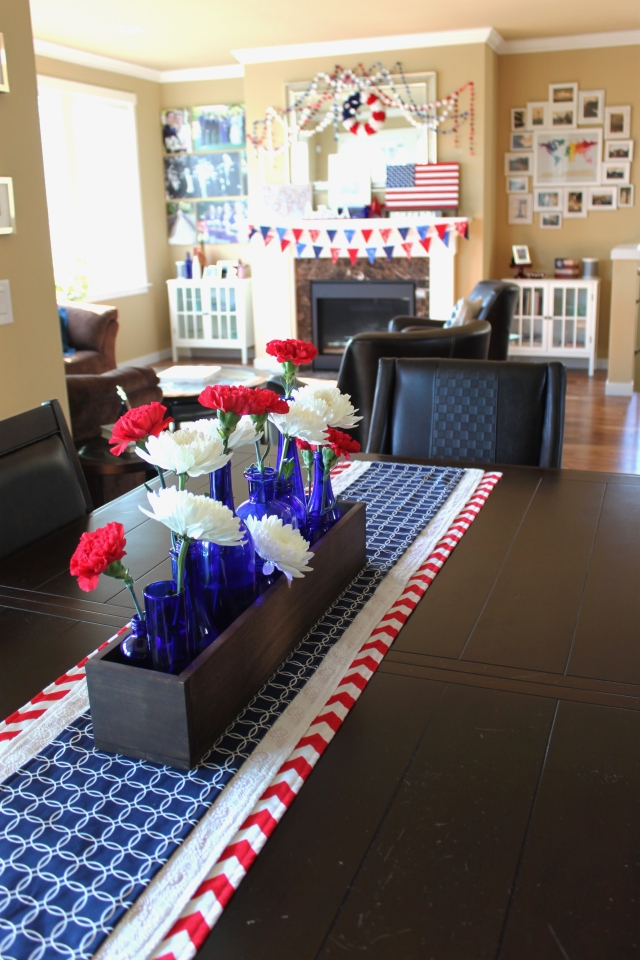 I do agree with Vu, that I love these decorations too, but I feel like I say that after every month…