For Rachel’s last night here I had a little going away party for her.  I decided to do a Boston vs Seattle theme, since she was leaving Seattle and moving to Boston.  To continue my little imagined rivalry for the party I used colors from each city’s baseball teams, the Mariner’s and the Red Sox, blue representing Seattle and Red representing Boston.  I had the intention of doing something else with the Red Sox and Mariners, but never quite got around to it.  So just the colors it is.

By far my very favorite idea was the Seattle and Boston skylines.  I found some 4′ tall butcher paper and then using some skyline pictures I found on the internet as a reference point I drew each skyline on the paper and then painted them in with black paint (I used 2 different black paints because I ran out of the first one and obviously the one I used for the Boston skyline was a better quality… they looked the same until I hung them up over the window and then it was too late to redo it).  And I have to say that as much as I love Boston, the Seattle skyline is prettier.  There is just something about a large unique structure that adds so much beauty to a skyline.  (Hello Eiffel Tower I am talking to you!)  Also something to note.  Both Rachel and I currently reside in cities on the water.  Coincidence? I don’t think so.  Even though neither of us actually live in the city.  But in the suburbs of the city.  Or more precisely in the suburbs of the suburbs. 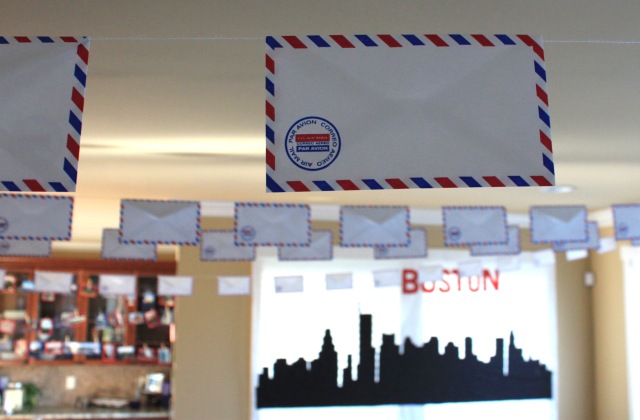 I used air mail envelops to make a garland, just hanging the flap over some string.  They fit perfectly with the color scheme, with the red and blue edges.

Using the butcher paper I also drew a map of the US in pencil and then traced over it with a black sharpie and then hung it over the mirror with hearts over Seattle and Boston.   Many people asked if she had a layover in Nebraska because of the little loop in the dotted lines… She did actually have quite a bit of turbulence right in the middle of her flight, in about that area…  Also I noticed that I squished the map a bit, it’s a little bit too short.  Vu couldn’t tell, but I could see it as soon as I stood back and looked at it.  But I like looking at maps a lot.  I did free hand it though, so I am still pretty proud of myself that it actually looks like the US, squatty Louisiana and all. END_OF_DOCUMENT_TOKEN_TO_BE_REPLACED

Yesterday was a monumental day in the life of a twin.  It was the day that my twin sister, Rachel, abandoned me and moved to Boston.  For the first time in our lives we will be permanently living in different locations.  (We were apart twice in college when we did study abroad programs and I went to Paris and the next year she went to Washington D.C. but they were just 4 month’s each).  And Boston and Seattle?  On OPPOSITE sides of the country!?!  Sad, sad day!!!

So in honor of this monumental day, here is, in my professional opinion, why being a twin is the best.

1. Even if I instigated 100% of the trouble (which admittedly there wasn’t a lot of) I only received 50% of the blame.  (And let’s be honest, I was always the instigator.  And yet everyone always believed me when I said it was her… mwhahaha).

2. Only a twin would be asked if I ever woke up and thought that I was my sister… come on people…I mean do you ever wake up and think that you are Brad Pitt?  Ok, well some people maybe do…

Oh and just to clarify, if I don’t want to take a test or go out with a particular guy, then neither does she… so no we never switched places.

3. We can read each others thoughts.  Ok not really.  But we do know each other so well that in many situations we can communicate with just a look because we know how the other would be thinking in that situation.   But this can happen with anyone that spends a lot of time with another person and talks a lot about what they think.

4.  Rarely does a day go by that we don’t text, talk on the phone or hang out.  (sidenote: After we had been married for about a year Vu confessed that before we got married he read a book about how to be married to a twin.  The answer: don’t try to understand it and don’t get in between it!)

5.  You have someone who shares your obsessions: waterfalls, lighthouses, bridges, rain, excel spreadsheet goal lists (but really her obsession with this one is much greater than mine), making things out of wood, photography, reading, traveling, maps, cooking, etc…

6. When we get in a fight, we are pretty much back to normal five minutes later.

7. I have a permanent best friend, travel buddy, confidant, and someone to go to things with.

8.  I hate driving and since we do/did so much together I rarely have/had to drive (I didn’t get my license until I was 17 and had to renew my driver’s permit 3 times because once Rachel got her license I saw no need to have my own).

9.  We can call each other with the intention of talking for 5 minutes and end up talking for 2 1/2 hours.

10.  I know that no matter what happens in my life, I will always have someone that will be there for me!  God knew what he was doing when he gave us each other!

And so, a picture ode to being a twin.  Because this is a hard day.

Awww, precious!   Anyone want to see if they can tell which is which in all of these pics? (Mom you are excluded, you too Chani)  But I mean it is obvious isn’t it?

END_OF_DOCUMENT_TOKEN_TO_BE_REPLACED

May was really easy because I had it pretty much all done last year for the House Tour.  However, I still wanted to try and change it up, so I mixed a few things around.  I kept trying to think of other things that I could add, but kept coming up blank.  I did add a couple of new things, but that was all I could get.  I do love the new additions though.  For the mantle I changed it up by grouping the bottles and vases together with some candles, instead of having them separated by color and kept them all together on one side instead of one color on each side, and I didn’t put the flowers inside them either. 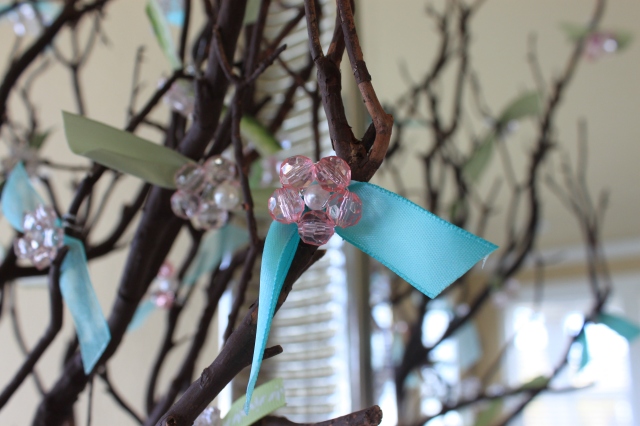 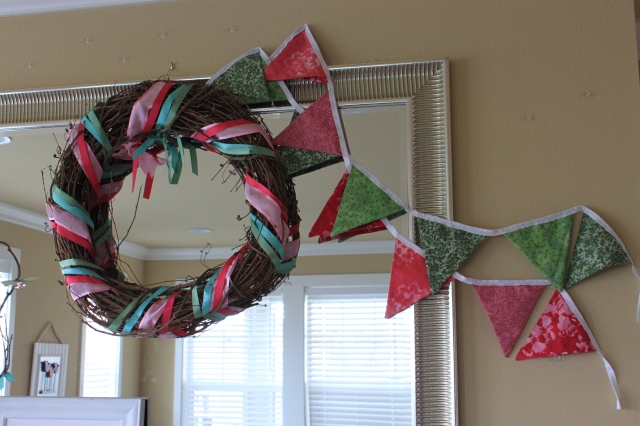 Just a recap from last year, the bottles I painted with enamel paint, the picture frame has a floral illustrator graphic I created, the branches have bead and ribbon blossoms I made from pulling apart a beaded garland, I wrapped some ribbon around a twig wreath and made a couple of small triangle fabric banners. END_OF_DOCUMENT_TOKEN_TO_BE_REPLACED