Yay it’s February!  So excited that I am still 2 for 2 for the holiday decorations.  I am really happy with how February’s decorations have turned out.  I hardly had any Valentine’s decorations before, but I spent very little money on this, plus almost everything that I did buy was on sale or on clearance.  That always makes me (and Vu) happy. 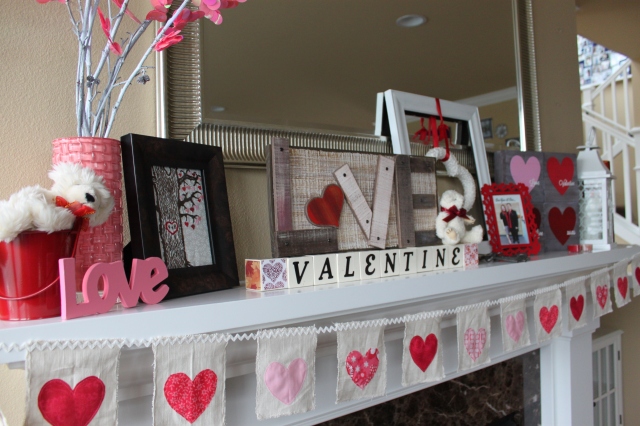 I made the 4 heart blocks a couple of weeks ago.  I was planning on making my own “Love” sign but then I saw this one at Joann’s that I really liked and it was 80% off… so I just bought it instead.  (Also I forgot to add that the letter blocks that were also in January’s décor I made a few years ago using this tutorial.)

I have really gotten into embroidery the last year and wanted to make something for Valentine’s day too.  I love tree’s and I have seen so many variations of the initials carved into a tree so decided that is what I wanted to do.  I have to be honest, I don’t love how it turned out.  There are a number of things I would like to change about it, so maybe another year I will redo it.  But I like it well enough for now.  I kept the branches from the January décor and added some sequin “branches” to them.  I took pieces of wire and twisted pink 20 mm round sequins onto them and then twisted them around the tree branches.

The heart garland is one of my favorite things, I love how it turned out.  I had some scraps of beige muslin left from another project so I cut them into 4.5″ x 5.5″ rectangles, then sewed a zig zag stitch around the edges to prevent fraying and to give it a little bit of a rough edge.  Then I printed out a paper heart to use as a template and pinned it to the different pink fabrics (fat quarters from Joann’s that I got 50% off) and cut out around it then sewed the fabric hearts onto the muslin.  I found some matching ric rac in a huge stash of craft supplies I “inherited” from my Grandma when she died (craft supply hoarding may be a family trait…my mom has a lot too…), and I used that to sew along the top to make the garland.  I love it with the ric rac.  It was a really easy project.

I pinned this on Pinterest forever ago and I have been wanting to make my own.  I found some red twine that I was going to use, but I couldn’t get it to work out at all.  So instead I had some tiny white paper flowers that I attached to a Styrofoam heart with little straight head pins.  (The heart picture frame with the matching red picture of me and Vu and the small pink love sign were bridal shower gifts from a friend, and the love keys were from our wedding).

(Can you see the Halloween picture of me and Vu as Princess Leia and Han Solo?)

For the coffee table I made some origami roses and pushed some wooden skewers into the center of them and put them in a vase with some little red hearts I got on clearance at Hobby Lobby.  (At the end of last year my friend Carrie informed me that there was a Hobby Lobby in Washington that was only 35 minutes from my house instead of an hour+ and I have been 3 times already since she told me). 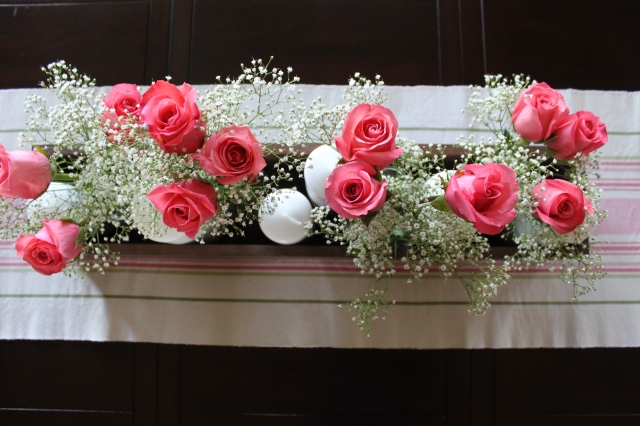 I got some real roses for the table centerpiece.  I made this wooden box in November and I added some candles and clear vases to it and filled the vases with the baby’s breath and roses.   I love having fresh flowers around, they are so pretty.