Last weekend a couple of friends, Monica and Jeanette,  and I threw a bridal shower for our friend Amanda.  She met her fiancé when hiking Mount Everest Base Camp…

So we had a Mount Everest Themed bridal shower for her.  I painted a foam board to look like the sign to point you in right direction… which is as close as I will ever get to it.

I went with a sort of woodsy + snowflake mountain theme for the decorations.  Vu doesn’t love it when I light real candles in the house (always so afraid of setting the house on fire that one is), so I kept it to just the tea lights in mason jars.

I had these green wood “trees” that are for a project that I started back in December of 2014, and got as far as painting them this year, but still didn’t get them finished.  It turned out well for me this time because I thought they would make the perfect mountains covered with some white capped paper snow.  Then I just pulled out some of the trees from the Christmas decorations and left up a bunch of the snowflake January decorations.

I made a “prayer flag” banner, but really they are just rectangles in the same colors as the Everest prayer flags.  That way I can reuse them later… but it still gave the same effect. 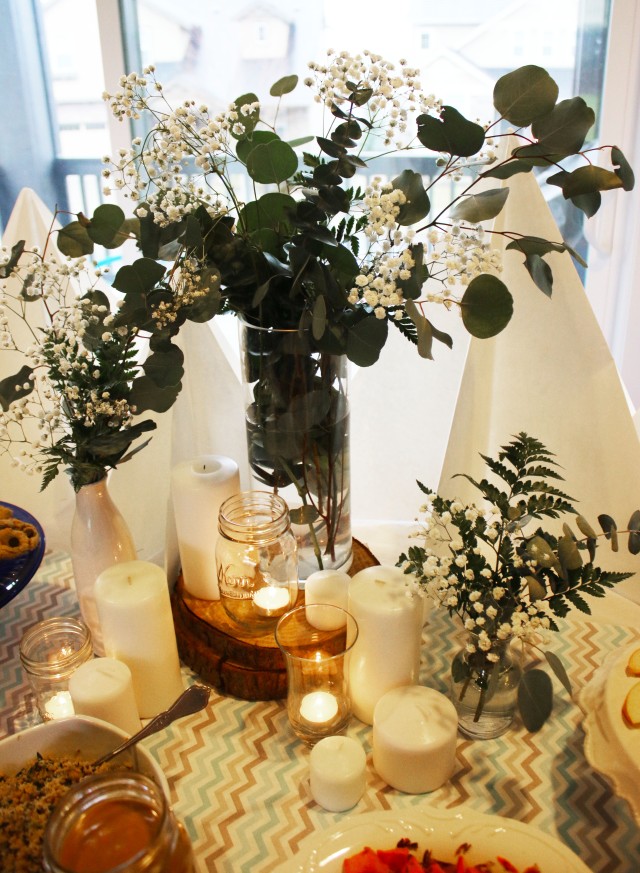 For the food table I folded some butcher paper to make a little mountain range backdrop.  This took some practice to figure out how to get the folds all the same size.  Then I stapled the folds together at the bottom to hold their mountain shape. 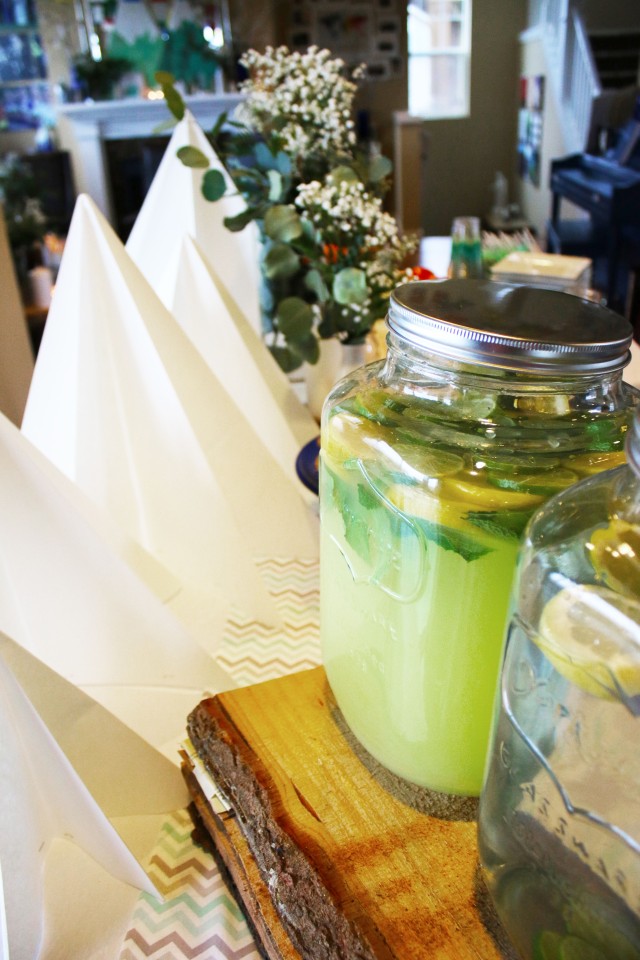 I found these cute birch tree paper straws and wooden utensils and made up little sleeves for them by cutting up some small paper bags and folding them to the right size.  Then printed a little mountain graphic to wrap around the sleeve. 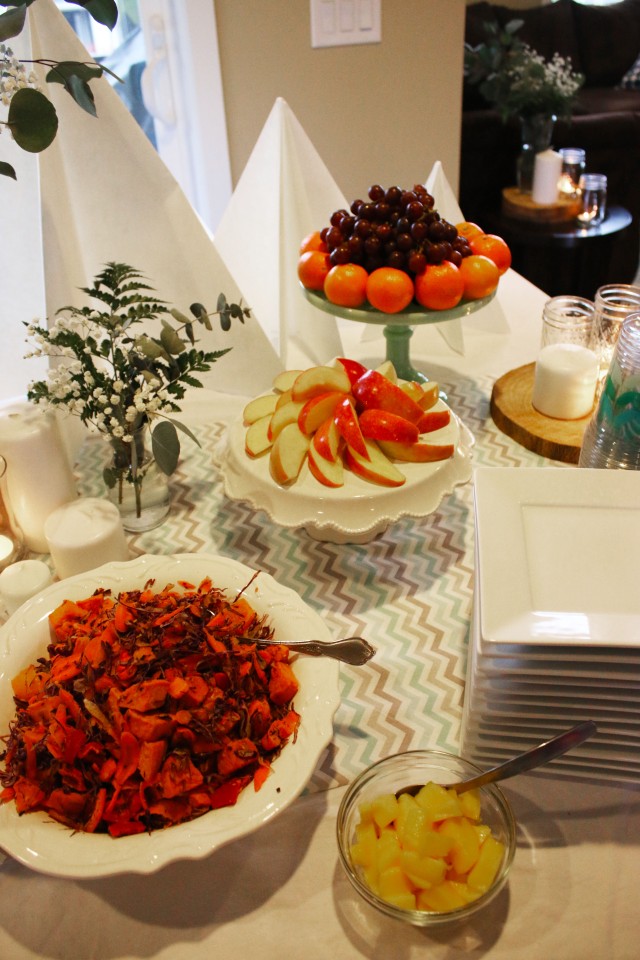 Jeanette did most of the food and she is so good at making healthy food taste delicious!  Amanda is vegan and all of the food was vegan (except the chicken quinoa on the side) and it was all really good! 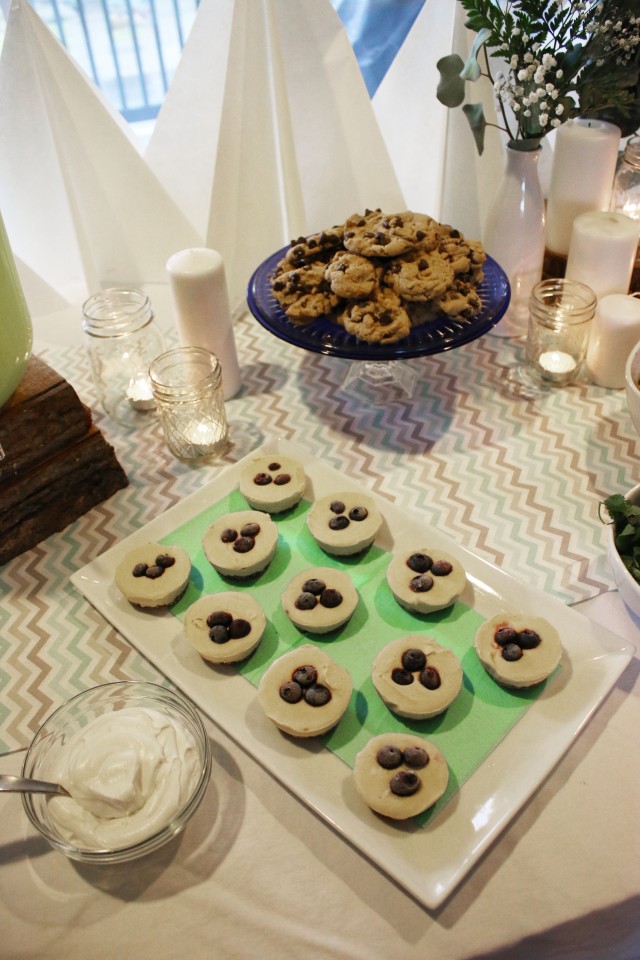 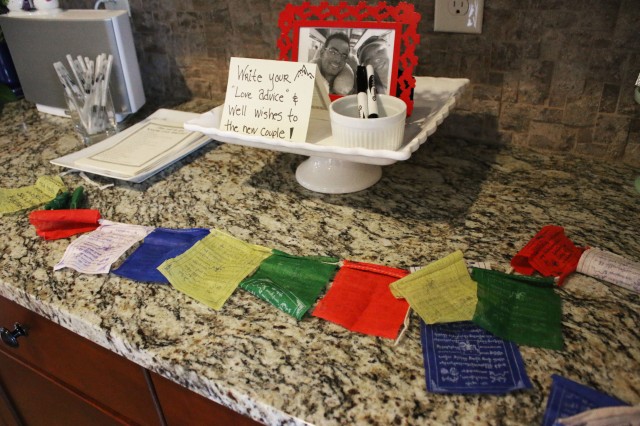 Monica made a little trail mix bar, you know for all of us to make it up the trek to base camp 🙂 and she also found this prayer flag garland to use for all of us to write our marriage wishes and advice for Amanda on. 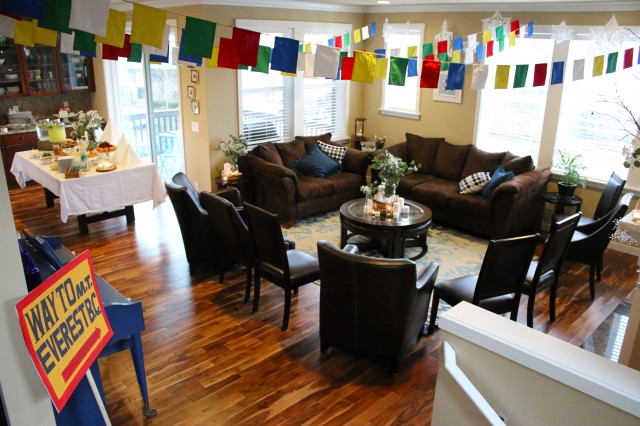 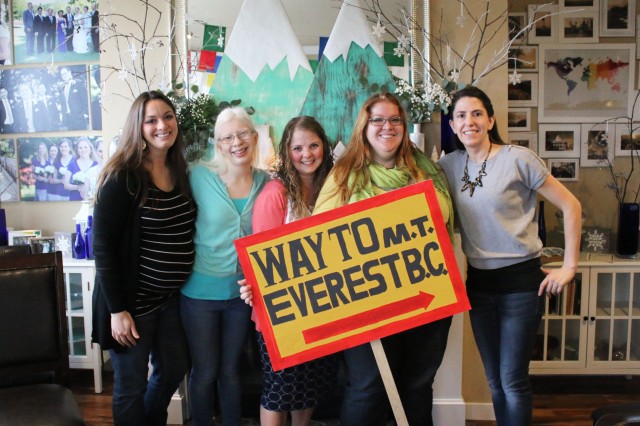 All 3 of us with the Bride to be (plus Monica’s daughter)!

Monica is really clever and she came up with the idea to give Dairy Queen gift cards as favors for everyone to go and get a blizzard.  Because if Amanda’s story isn’t already crazy enough, they also happened to have survived through a Mount Everest Blizzard together.  The kind where you can’t see the trail in front of you because the snow is so thick and where one of you falls and is knocked unconscious and wakes up with her head hanging over the side of a cliff… in case you know of a different kind of Mount Everest blizzard.  Crazy!

We all had a great time and are very excited for her!