I can’t believe it is already November.  October went by so fast.  I had most of the November decorations done last year, and a lot of them I have had for years.  I didn’t end up putting them out very early though, because I was in Boston visiting my sister until the end of October, and I wanted to enjoy the October decorations for a little while longer since I was gone for so much of the month.  And then I got sick when I was planning on changing them. 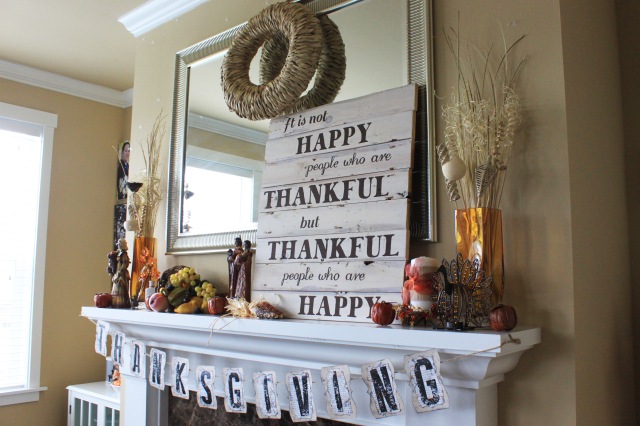 I only had 3 things that I actually made this month, the Thankful sign, the Thanksgiving banner and the ornament pumpkin.  I also bought a few things, like the wreath (from Home Goods) and the table runner (from a party store).  It was a good thing I didn’t have too much to do since I was gone for half of October.  I never would have gotten it done. 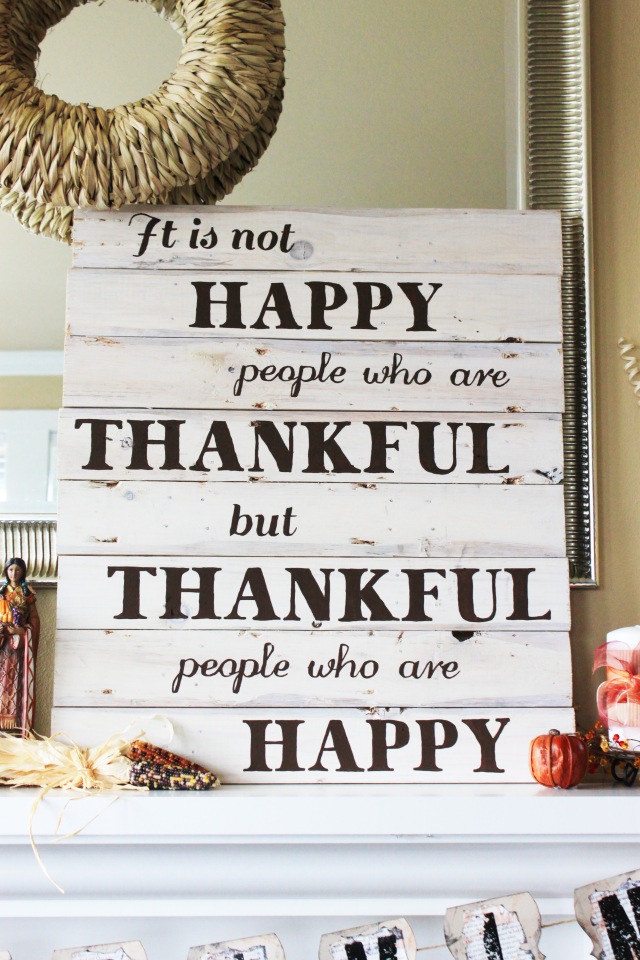 The Thankful sign was actually a project that I started a year and a half ago and it was supposed to be for the master bedroom.  I cut, nailed together and white washed the sign, and was all ready to paint the quote on.  But the problem was I couldn’t decide what quote to use.  (I wanted something from Pride and Prejudice and Vu wanted Star Wars)  So it sat in our garage for a year and a half, waiting for me to decide.  Then this year as I have been planning out the decorations for each month I knew that for the Thanksgiving decorations I wanted to use this quote.  I love it so much, and I think there is so much truth in this statement.  Plus it has been especially poignant for me this past year.  I have been thinking a lot about how there seems to always be something in life that is difficult.  I think there is only one time in my life where I felt like every single aspect of my life was exactly how I wanted it to be (what a great year that was!).  So this past year I have been thinking about life’s difficulties a lot and how most likely there will always be something that can be a source of unhappiness.  But that doesn’t mean I have to always be unhappy.  Happiness is something that comes from focusing on the things in life that I do have, that I do love, and being grateful for those.  Because I am a firm believer that there is always something beautiful if life, if you just learn to always look for it.  I just want to remember that more often.  I have also been reading this talk a lot this year, which I love and has been a great reminder as well. 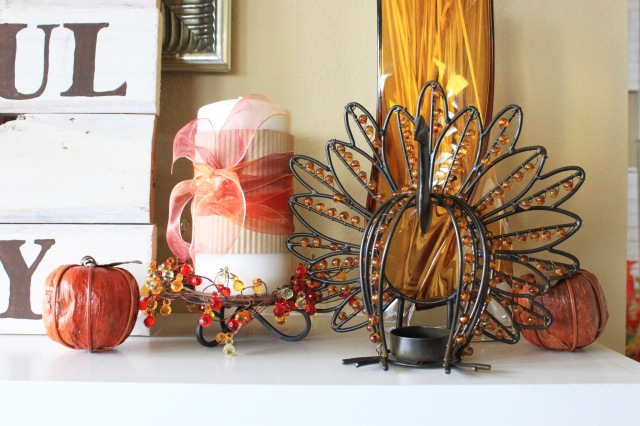 A lot of the decorations, like this candle and the other ones, were from that fall activity I did years ago (story here).

The Thanksgiving Banner I saw here and used ink on the edges instead of glitter.

This is the last new project of the year.  I used some thick brown wrapped wire to create the pumpkin form and then inserted the orange ornaments inside. 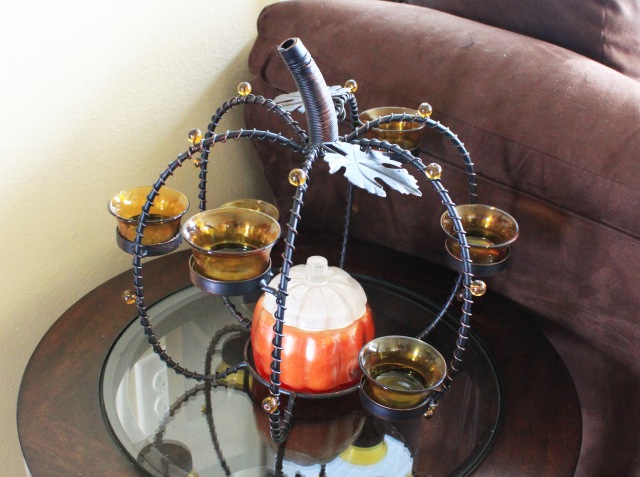 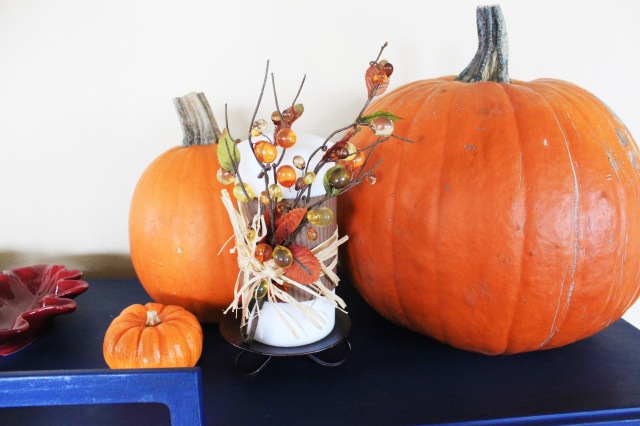 I used the planter box for the centerpiece and filled it with some mason jars filled with different small orange/fall items and then filled around them with some leaves.  Then I wrapped some burlap ribbon and twine around the box. 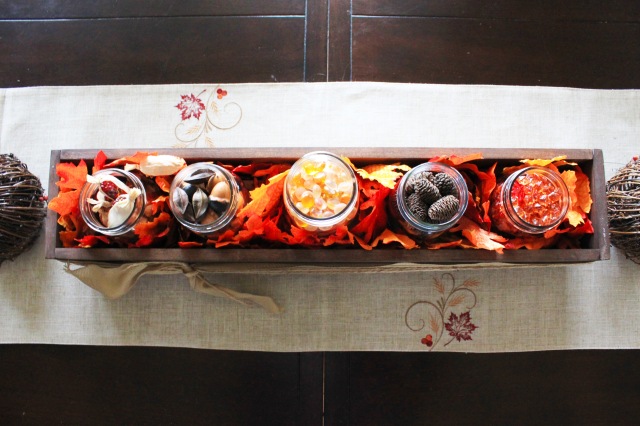 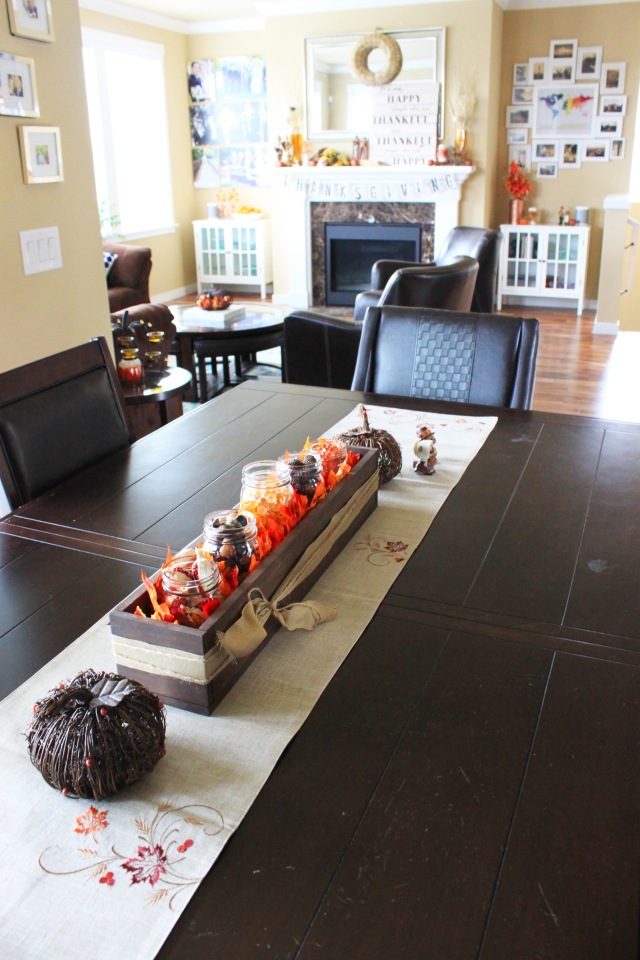